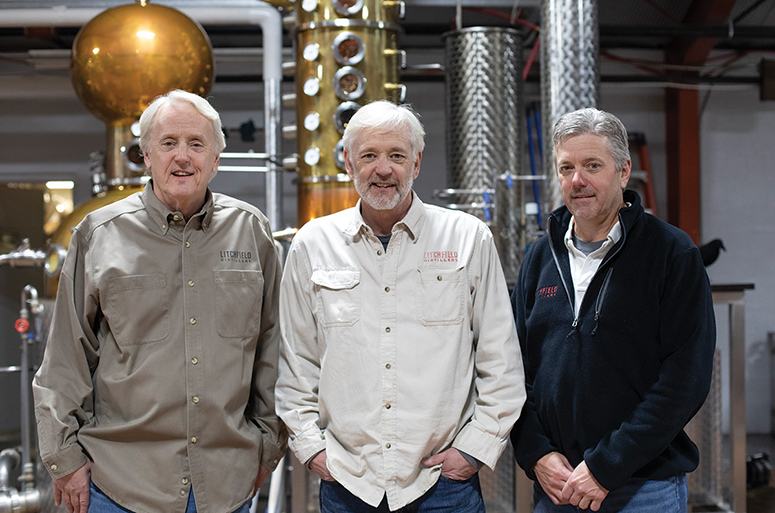 Hollywood once featured “The Fabulous Baker Boys,” about two brothers (Jeff and Beau Bridges) who are struggling musicians until they meet singer Michelle Pfeiffer. Litchield, Conn., has its own terrific Baker brothers in the form of David, Jack, and Peter Baker, co-founders of Litchfield Distillery.

Their line of bourbons, gins, vodkas, and canned cocktails are making their way into the Maryland market, and the siblings are hoping for big things. “We think our relationship with Constantine Wines is going to be a great one going forward,” said Peter Baker, the youngest of the three. “I think the demographics of Maryland are very attractive. We lose a bit of our local story the further we get away from Connecticut, but we’re pretty proud of what we do here.”

Middle brother Jack Baker thinks their Connecticut ties are still something Marylanders should appreciate and know about. “We’re lucky to have the great resources that are our local farmers,” he said. “Connecticut has great soils for grains. Our corn is known everywhere. Our rye and barley are grown in the state. The New England climate is different than, say, Kentucky.” 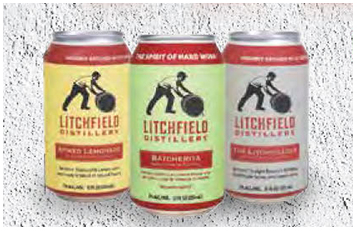 Litchfield Distillery’s ready-to-drink, canned cocktails should prove especially enticing to drinkers across the Old Line State. The Batcherita is the brothers’ newest concoction. This tasty, Margarita-inspired offering is crafted from a recipe with spirits distilled from agave, agave syrup, lime juice, and natural orange flavor. According to Peter, “we call ourselves ‘batchers,’ because we make small batches of things. That’s where the word ‘Batcherita’ comes from.”

Additional canned cocktails include a Spiked Lemonade and “The Litchfield,” a crowd-sourced cocktail that is a blend of the distillery’s straight Bourbon whiskey, local maple syrup, and lemon juice. Jack Baker remarked, “It’s kind of like a New England whiskey sour. It’s 7 percent alcohol, so it’s light and easy to drink. It’s very versatile and appeals to both bourbon and non-bourbon drinkers.”

Other spirits in Litchfield Distillery’s lineup include multiple bourbon whiskeys (everything from double-barreled bourbon aged five years to such flavored variations as cinnamon and coffee) and numerous flavored vodkas (apple, blueberry, and more).

Founded in 2014, Litchfield Distillery has grown steadily and recently completed an expansion of its distillation capacity with the installation of a second fermentation and distillation line. The equipment for the second line includes a new hybrid still and five fermentation tanks. “It’s going to increase our total footprint by 50 percent,” Peter said. “We’re busting at the seams. We’re doubling our output of product, so we needed to plan for that and have plenty of room to store those barrels.”

So, what’s the secret of the brothers’ success? And how do three siblings work so closely together and still get along? The youngest was quick to answer. Peter replied, “We were in a three-generation family business [water] prior to this. So, we’ve got a lifetime experience of working together. We’re hands-on here. We are physically on the floor every day. It’s not just a couple of guys who got together, threw some money into a venture, and have had other people doing all of the distilling and sourcing. We do all of that ourselves. The upside is we have each other’s back. I tell most people who come through here, ‘Hey, at least we don’t get into fistfights anymore like we did when we were younger!’”