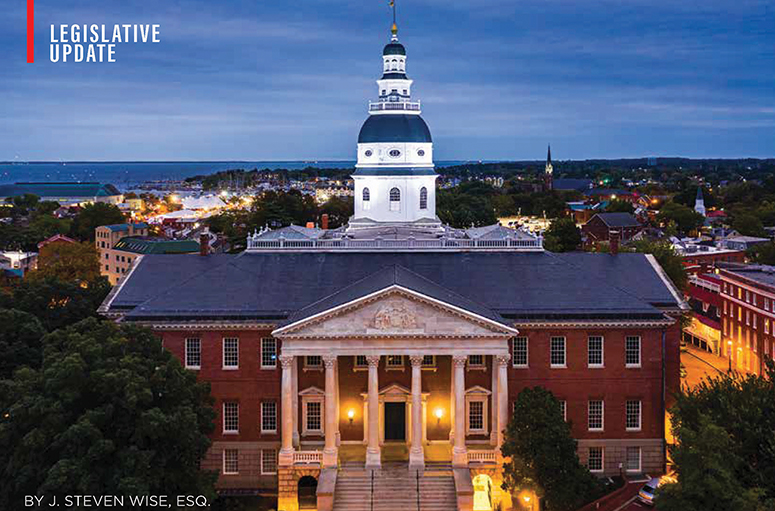 The Maryland General Assembly recently wrapped up its annual 90-day Session, the last one of this four-year term, and the election season of 2022 has begun in earnest for all Delegates, Senators, and statewide office holders. In fact, one of the biggest issues of the Session was the drawing of district maps, both for State legislators and Members of Congress, a process that occurs every 10 years following the U.S. Census.

Even with redistricting in play, the Legislature acted on a number of high-profile issues. First, the only legislation required to pass each year is a Budget, and that job was made easier than ever this year with a surplus larger than the State has seen in its history, thanks to federal funds sent down through COVID relief legislation and federal infrastructure monies. The Assembly also passed legislation addressing climate change, abortion access, tax relief for retirees, and sent the legalization of marijuana to the ballot.

The beverage alcohol industry had its own high-profile issues, too, as set out below. Every reader should know that our outstanding results are the product of a solid team effort: Jack Milani and David Marberger as our fearless Co-Legislative Chairs, all members of the Legislative Committee, those who testified on individual bills, and most importantly, our Executive Director Jane Springer who never fails to keep the trains running on time.

This legislation would have placed a question on the November 2022 ballot asking: “Do you favor the ability of retail grocery establishments in the State, such as grocery stores and supermarkets, to sell beer and wine to individuals who are at least 21 years of age?” If voters approved, the Maryland Constitution would be amended to allow “retail grocery establishments” to obtain beer and wine licenses. The General Assembly would then have to adopt a regulatory framework to implement the law and “prioritize the issuance of beer and wine licenses for retail grocery establishments that are located in geographic areas that have demonstrated lack of affordable healthy food options.”  This is similar to legislation that was defeated in 2021 that would have allowed supermarkets to obtain licenses in “food deserts.”  The House Bill was withdrawn, while the Senate bill was soundly defeated by the Senate Education, Health, and Environmental Affairs Committee (EHEA) by a vote of 11-0.

MSLBA strongly opposed these bills, and we were joined in opposition by the public health community, specifically Kathy Hoke from the Maryland Public Health Association and Raimee Eck from the Legal Resource Center for Public Health Policy, who argued that putting beer and wine in supermarkets in food deserts creates one public health problem to solve another. We also were joined by Nick Manis of the Maryland Beer Wholesalers Association and member Dan Hoose from Bob Hall Distributors. MSLBA retailers who testified are listed below, all of whom provided excellent input on the effect this legislation would have on their businesses. Describing the hearings in the House and Senate do not do justice to the impact of their testimony, however. You should take the time to click on the following links to view the hearings:

House Bill 858 also would have allowed “retail grocery establishments” to obtain beer and wine licenses, though it was even broader than the constitutional amendment legislation above, in that it included convenience store chains like Royal Farms as well. To be eligible, stores would have to offer certain food types and be 3,200 square feet or more. The bill would allow the chains to hold multiple licenses and relieve them from residency and other requirements imposed on other licensees.

Both the House and Senate Committees considered this legislation in tandem with House Bill 506/Senate Bill 603 (above) given the similar subject matter. The bill was defeated by the House Economic Matters Committee (ECM) by a vote of 19 against and 1 in favor.

Senate Bill 618 would have submitted to Baltimore City voters the question of whether beer and wine should be made available in chain stores and supermarkets. This legislation had an added legislative hurdle in that it was a local bill, which must first pass muster with the local delegation—in this case the Baltimore City Senate Delegation—before the Senate standing committee would consider it.

Thanks to the great testimony of MSLBA members Mike Fishman and Jeryl Cole before the Baltimore City Senate Delegation, this legislation did not garner the 4 votes needed to move out of the Delegation.

This is legislation that we have seen introduced on numerous occasions at the request of Total Wine, allowing for an entity to hold more than one Class A license. MSLBA has always opposed these efforts. House Bill 1406 was filed after the bill introduction deadline and was sent to the House Rules Committee, an additional procedural step imposed on late-filed bills. It never emerged from there, so no hearing was held.

This legislation involves direct shipment by manufacturers and has its roots in the COVID pandemic, when Governor Hogan issued an Executive Order allowing alcohol delivery and direct shipment by Maryland manufacturers. In the 2021 Session, the Legislature passed a bill codifying this privilege, but sunset it in December of 2022. Predictably, the manufacturers returned seeking to extend the privilege ahead of the law’s expiration this summer. With the passage of this bill, the privilege will expire in June of 2023 without further action by the Legislature.

MSLBA objects to direct shipment for two main reasons: 1) there is no underage enforcement with direct-to-consumer deliveries like there is with brick-and-mortar sales, and 2) allowing direct shipment of alcohol by manufacturers in Maryland may require that out-of-state manufacturers be given the same privilege under the Supreme Court’s decision in Granholm v. Heald, 544 U.S. 460 (2005).

Sales of Other Manufacturers’ Products (FAILED)

Thankfully, the House and Senate both appreciated the need to put a stop to this trend, and these bills were all killed.

This legislation would have altered the excise tax rate assessed on “ready to drink” cocktails (RTDs). Manufacturers of RTDs that are distilled spirits based brought this legislation, arguing that their RTDs should be taxed the same as malt-based RTDs. Currently, the distilled spirits based RTDs are taxed higher than the malt-based, just like all other alcohol products follow that scale. Oddly, the new tax rate under the bill would have been the same rate currently applied to wine products (.40 cents per gallon).

While the legislation had the potential to impact which retailers could sell RTDs, since a beer and wine licensee is not technically permitted to sell distilled spirits based RTDs, the bill died of its own weight. But this issue is bound to come back, as the Distilled Spirits Council has a broader agenda at the national level of leveling all alcohol taxes.

This legislation sought to increase the commissions paid to lottery agents from the current 5.5% to 6.0%. Going back to 2005, agents were paid a sales commission of 5.5%. That amount was reduced to 5.0% in 2009 when the State and many residents fell on more difficult times, and they remained at that level through 2013.  The General Assembly then increased the commission to 6% effective upon the opening of the Horseshoe Casino in 2014, only to reduce it back to 5.5% before the higher rate ever really took effect.

The House passed this legislation by a margin of 130-1. The Senate, however, reduced the increase to 5.75% and sent the bill back to the House, which refused to accept the Senate amendment. With some further negotiation, the Senate accepted the 6% rate with little time to spare: House Bill 1179 was the LAST bill to be voted on before the Senate adjourned.  The vote occurred at 11:59, with only one minute to spare on the final night of the Session!

While not an issue that MSLBA focused on, legislation passed establishing family and medical leave requirements on Maryland businesses. Our firm prepared a summary of this legislation under separate cover for your reference.

As these results show, MSLBA had another outstanding Session. This would not happen without our members forming relationships with and contacting their local legislators on these important issues, something we talk about often but the importance of which cannot be overstated.