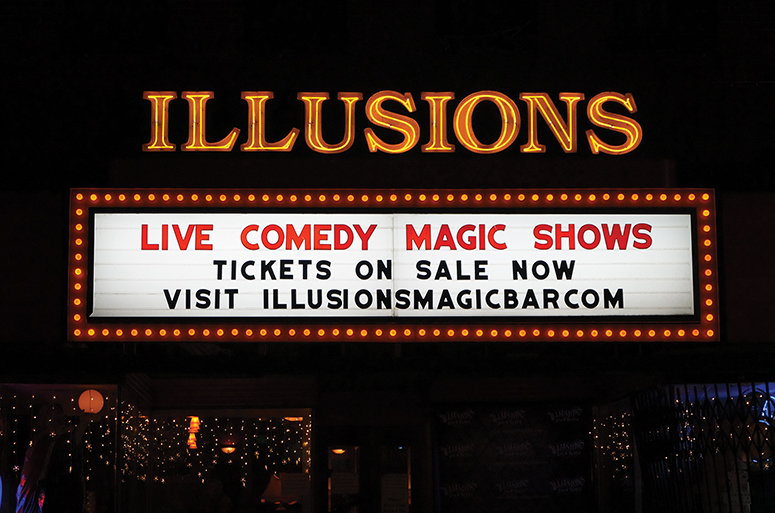 We all could use a little magic in our lives during these tough times. Illusions Bar & Theater in Baltimore is seeking to give us just that. This is the fourth in our series of articles on great themed bars and restaurants in and around Maryland, and Illusions does what every great themed place tries to do – provide a temporary escape for its customers.

Co-founder and magician extraordinaire Spencer Horsman says that is the most important part of his job. During a recent interview with the Beverage Journal, he stated, “I perform because I like providing an escape for people. We all have things in our lives that we need to have an escape from, whether it’s the global pandemic or something more personal. If I can pull you out of that bubble for a little while, that’s great. On top of that, because of the mix of people we get from night to night, it’s amazing to see the interaction between folks from all walks of life. Because we put on an interactive show, I get people to meet each other, interact with each other, and learn about each other. At other places, you just interact with the server, maybe the bartender, and your date, and that’s it. Also, it’s a magic show. At the end of the day, hopefully I’ve also created a sense of wonder and mystery for you.”

Horsman opened Illusions with his late father, Kenneth, in March 2007. Originally, it was his family’s magic store, which opened in 1987 when he was just a small child. Spencer would eventually graduate high school and take his magic act on the road before returning to Charm City where he and his dad hatched the idea to combine a bar with a nightly magic show.

Kenneth Horsman passed away in May 2016 and, today, there’s no doubt his son is firmly in charge of all aspects of the business. “I believe in being a hands-on, on-premise owner,” he said. “I’m the first person you meet when you come in. I welcome the people, give them their drink tickets, and check them in. Then, I’ll jump on stage and perform. And at intermission, you may see me clearing tables.”

Though it may sound as if Horsman is a solo act, Illusions’ guests quickly learn otherwise.  After entering and being greeted by Horsman, guests are next introduced to Nicole Bailey.  Bailey’s official title is operations manager and while she easily fits the magician’s attractive assistant billing (and she does assist as well as take part in ‘the show’) someone needs to be the lead bartender, server, busser, and glasswasher.  While Illusions provides an escape from ordinary life, the team is also running a high-end beverage alcohol service.

In terms of a clientele, Illusions draws a wide range of customers – “everyone from 21 to 91,” Horsman touts. First and foremost, though, the Bar & Theater has emerged as an excellent night out for couples. “The first year we were open, the old City Paper awarded us Best First Date Bar,” he recalled. “That stuck. Travel guides talked about us being a first-date place because we would give couples something beyond just the typical dinner, drinks, and a movie. Illusions gives you something you can both mutually enjoy and then have a conversation about.” 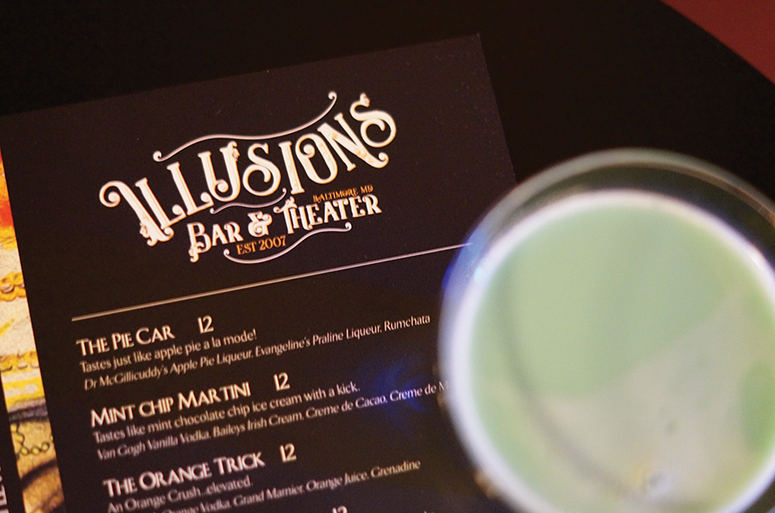 By his count, Illusions has been the site of 11 marriage proposals. “I’ll get asked, ‘Hey, can you make the ring appear so I can come on stage and propose to my girlfriend?’ We’ve had a really good track record with that. So far, everybody has said, ‘Yes!’ I don’t know if they’re all still together. But they all said ‘Yes!’”

Illusions doesn’t just attract couples. Horsman said, “We have a lot of repeat customers. As a result, we change up the show so that people will come back and see new magic. But Illusions is something that is so unique that we also get a lot of out-of-towners. Baltimore is a big transplant city now. A lot of the people who live here, their families don’t live here. So, we often are told, ‘My parents are visiting, and we just had to bring them here!’” 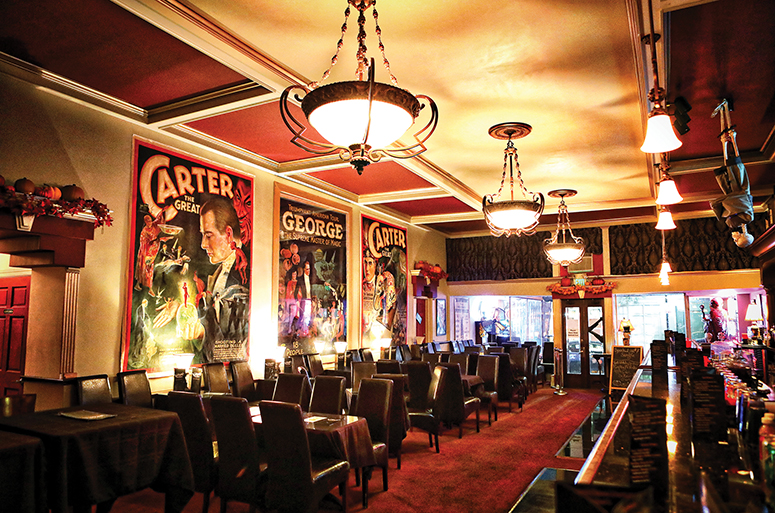 He added, “We also get a lot of private parties, which has been a shift since COVID. Originally, we used to be able to seat 90 people for our shows. To guarantee a private event, we would have to have 40 or 50 to make it worthwhile. But when COVID hit, we started doing smaller, more intimate shows. When we first reopened, I was only allowed eight people at a time because of the restrictions, the six-foot distancing, and all of that. As time went on, I was allowed 12 and now I seat 30. Even though I’m allowed to go back to full capacity, I’m purposefully keeping it at 30. The experience is much more intimate and interactive. With 30 people, everybody gets involved as opposed to 90 where only a portion of the audience got involved. Because of that, we’ve booked more private parties than we ever had in the past. That’s been a nice, happy accident we’ve come across.”

The overall space has a 1920s, Art Deco look and feel. Everything in the bar has been custom-made for the Illusions experience. All of the lights are reproductions of 1920s-era Art Deco lighting. There are cast-iron columns that are from that time period. And the large posters on the walls are also from the ‘20s.

“I continue to pitch this as a full experience about my family and my background,” Horsman noted. “So, there is magic memorabilia on display that’s 100-plus years old. There is circus memorabilia from the time when my family was in the circus. There are other weird odds and ends -- skeletons and things like that. Everything is real and authentic. We didn’t go to some pop-up Halloween City store to get these decorations. Everything we have either has a history behind it or is a direct influence on the show itself.” 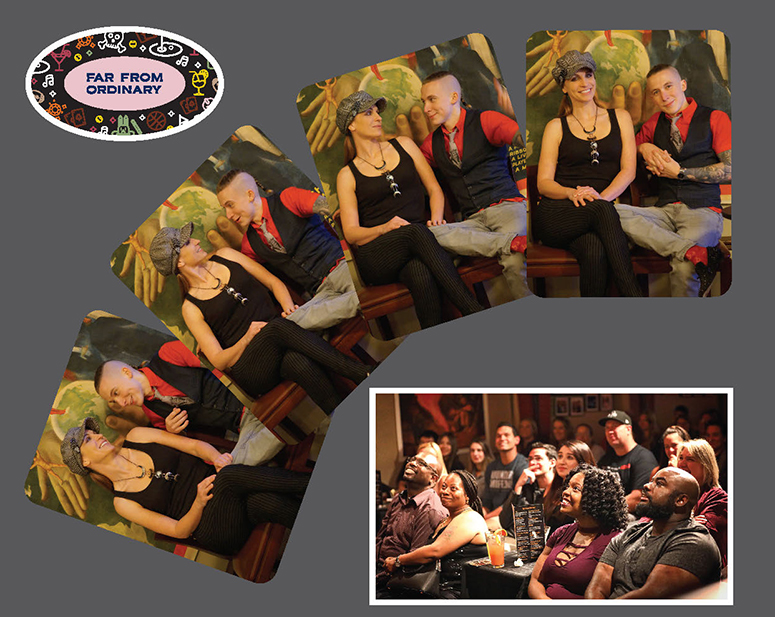 And, of course, there is Illusions’ impressive beverage selection. No food is served. Instead, the focus is on drinks that add to the experience. Horsman remarked, “Our drinks are something we take pride in. We work at a very fast pace with regards to creating cocktails. We don’t serve extreme craft cocktails that take five minutes apiece to make. Because my father came from a McDonald’s background with regards to customer service [Kenneth Horsman was hired to replace Willard Scott as Ronald McDonald. For over two decades, he represented the fast feeder for over 500 restaurants throughout the D.C-Virginia area], speed and efficiency are things that have been bred into me from Day One. We’ve tried to streamline our cocktails and ordering. But that doesn’t mean our selection is super-basic. We have an extensive liquor list at our back bar, and we also have a nice split between classic, Prohibition-style cocktails and the more accessible drinks people like.”

One thing that Horsman has avoided is naming too many cocktails on the menu after the theme. He said, “We have some drinks that are named after a specific magic trick. There is the Orange Trick, which is kind of our version of a Crush. We have one that is a layered martini called the Hypnotizing Hypnotic Martini. But we keep a lot of the other ones traditional. Everything else in the bar is heavily themed. So, we feel that you don’t have to drive the nail all the way in with the cocktails also named after magic. Then, it becomes a little bit too themed.”

That said, on any given night, Horsman or some other magician might use the bar’s shaker tins, whiskey bottles, or wine glasses as part of the act. People who are interested in seeing such feats of magic and slight-of-hand, tickets can be purchased at the Illusions website for $60 apiece. That includes the hour-and-a-half show and any two drinks from the bar. Currently, Illusions offers Friday shows at 8 p.m. and Saturday shows at 3 p.m. and 8 p.m. with the occasional Sunday matinee.