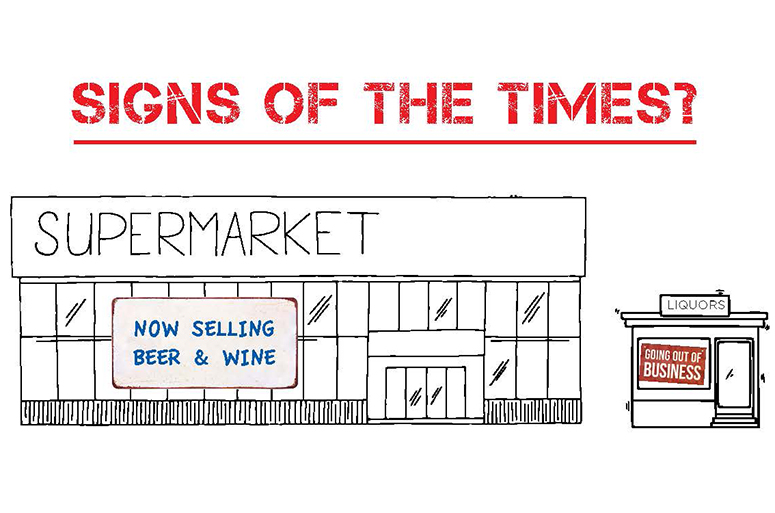 I've been writing this Maryland state legislative preview article each year at this time for nearly a decade now. The annual feature is usually a look ahead to the next General Assembly Session. But there's no way to move ahead with 2021 without acknowledging 2020, quite possibly the toughest, most challenging year on record for all facets of the beverage business.

The Year of the Pandemic worked its way into each of the three interviews I did for this feature. The COVID-19 crisis was a part of many answers to the questions I posed. Ultimately, though, all concerned expressed hope for the year ahead -- hope that business can return to something resembling normal. Just as important, they are hoping that state government will work with them rather than against them in 2021.

Attorney and Maryland State Licensed Beverage Association (MSLBA) lobbyist J. Steven "Steve" Wise remains ever vigilant. He's never left the front lines of battling in Annapolis on the industry's behalf. "There is already a major effort underway by the supermarket and convenience stores to put beer and wine in their locations," he cautioned. "We talk about this every year. But this year, they have marshaled their resources and are putting on a full-court press. Our members have already begun to respond to that, but that's going to take a lot of our energy over the course of the legislative session."

MSLBA Legislative Chairman Jack Milani shares Wise's concern. "In this upcoming session," he said, "the chain store issue is definitely coming at us. There is a bill already pre-filed in Prince George's County, and it wouldn't surprise us to see a statewide bill. It will indeed be a good time for all the legislators who say they support small business to show that small business really matters to them. A lot of people in Annapolis say, 'Oh yeah, I am for the small business people.' This will be a really good barometer."

Another issue looming in the New Year is a proposal to increase the alcohol sales tax. Maryland has both an excise tax and an alcohol sales tax. In 2012, the latter was raised from 6 percent to 9 percent, while the sales tax on all other goods remained the same. "So, it's already 50 percent higher in Maryland than other goods," Wise noted. "This proposal would take it to 10 percent. So, on top of everything else these small businesses are dealing with, they're looking at that. Our argument? Customers tend to shop with their feet. It won't take them long to figure out that some of our surrounding states have a lower tax burden."

So, why the proposed take hike? Milani, who has co-owned Monaghan's Pub in Woodlawn since 1990, was quick to respond. "They want to close the health-care disparity," he said. "While we acknowledge there is a need to do that, we're not sure why we're being singled out to carry that burden. Years ago when the state decided to expand the alcohol sales tax from 6 to 9 percent, we were told, 'Every time prices increase, the State will get a raise, and we won't have to look at this again.' Obviously, not everybody got that memo!"

At the same time, Wise and Milani will be looking to protect some of the positive changes that were implemented in 2020 to deal with the pandemic and its impact on business. "Thanks to Governor Hogan's executive order, bars and restaurants are able to sell whatever alcohol they're able to as part of their carryout and delivery services as long as it's purchased with food," Wise pointed out. "An on-premise account couldn't just wake up one morning and decide, 'Oh, I'm going to become an off-premise delivery business.' We want to make that executive order permanent, because the bars and restaurants are going to be in recovery mode for a long period of time even after there's a vaccine and things return to normal. Putting it into law will give them peace of mind that they'll be able to continue doing that."

Milani is going to have a certain piece of mind in the year to come with a new co-legislative chair. There has been a vacancy in the co-chair position for several years. David Marberger, proprietor of Bay Ridge Wine and Spirits in Annapolis, has accepted the assignment.

"I guess my name was the one drawn out of the hat!" Marberger, a past MSLBA President, joked before getting serious. "I've been involved with the MSLBA and our industry for 20-plus years. Now being involved in the day to day of the legislative session is going to be a change for me. There's going to be a learning curve. It's going to be like going back to school, and I'll need to be a quick study. I go into it knowing a little bit more than some, but a lot less than others. But with Jack, Steve, and [MSLBA Executive Director] Jane Springer, I couldn't learn from a better three-person panel."

All three men stressed that they and the MSLBA are in full-on "call to action" mode. With the health crisis still going on and lockdowns always a threat. It’s "all hands on deck" to ensure the state's on- and off-premise trade stays the course. "If ever there was a year for people in our industry to speak up and let legislators and decision-makers know what they've been going through, it's this year," declared Wise. "That's what the MSLBA is for -- to help them coordinate that effort. So, reach out to the association and ask, 'How can I help?'"

Milani concurred, adding, "It's now more important than ever to become a member of MSLBA or your local affiliate, which will make you a member of MSLBA. If you've come into this business, you have to understand that it is very highly regulated. In a normal year, we could have 70 to 80 bills that affect the industry. You need to get involved. If you've made an investment in this business, you should spend a few more dollars and become a member, then get to know your local legislators. Reach out to them, invite them to your business, show them what you do, how many people you employ, and what you do in the community."

He continued, "When these bills come up, they'll hopefully reach out to you and ask your opinion. Every legislator that I know wants input on these bills and how their constituency will be affected. That's why it is important they know who you are."

Marberger was even more direct, more urgent. He cautioned, "Our business is highly regulated, and the government can drastically change the landscape of our industry within the state by passing any one law or a multitude of laws. If we're not paying attention as to what the outcome is or can be, we can be drastically impacted. It's absolutely paramount that as many retailers as possible pay attention."

Through it all, Wise noted the importance of moving the industry forward. This can only be done, in his view, with some form of government help. "I would love to see some type of aid package for the bars and restaurants," he remarked. "Rather than increasing the sales tax, maybe we can look at lowering some taxes on these folks or doing some other things that help them get their financial feet back underneath them. That would do wonders for our industry, for our economy, and certainly for all of the employees and tax revenue that comes from them."

Marberger seconded the need for more help from elected officials. "There's a certain guilt that I and other packaged goods store operators feel. We've been a beneficiary -- and I hate to use that word -- of the crisis. Our business has certainly increased. But it's not because we did anything right. And restaurants and bars didn't do anything wrong to warrant being punished for this. There clearly needs to be a multitude of fixes, whether it's federal grants, state grants, local grants."

Milani just doesn't want new legislation that will go against his business and the businesses of his colleagues. He said, "I really hope all concerned remember what small businesses are all about. Let us just do our jobs. We certainly understand that we need to be regulated and that we need to follow the rules. The best thing Annapolis can do is leave us alone, let us run our businesses."

Wise was perhaps the most hopeful of the three interviewees. "I do think that there is some light at the end of the tunnel," he concluded, "which I attribute to the promise of a vaccine as well as improved treatments. Treatments have been buried under the headlines of the various vaccines, but I think there's some promise there. With the combination of those two things, I really hope that by the time we're midway through 2021 that people are starting to get some semblance of normalcy back."