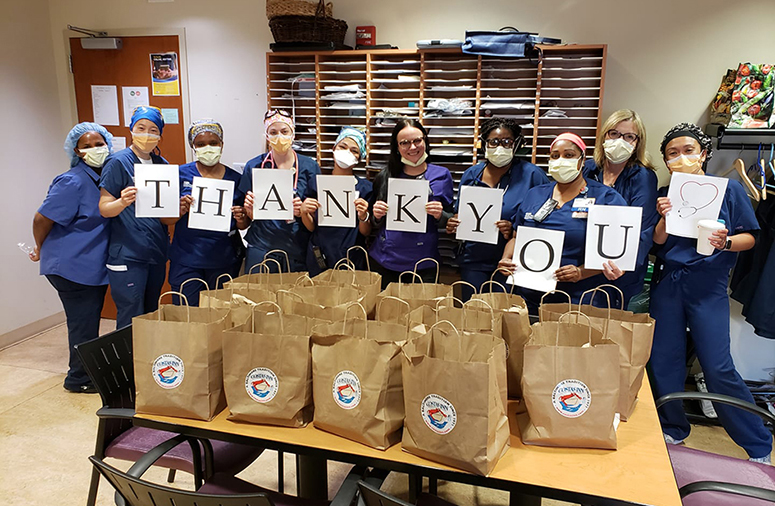 The IMC Unit of MedStar Franklin Square Medical Center is very appreciative of the crab cake platters prepared by Costas Inn and paid for by Drug City Liquors.

Six years ago, the world became captivated by the Ice Bucket Challenge, an initiative that involved the dumping of a bucket of ice water over a person's head to promote awareness of and raise funds for amyotrophic lateral sclerosis (ALS), or Lou Gehrig's disease. The challenge encouraged nominated participants to be filmed getting doused and then nominating three others to do the same. If the nominees either didn't comply within 24 hours or simply refused to get soaked, they would have to make a charitable donation to an ALS organization. The campaign raised over $220 million in research funds.

Flash forward to 2020. The Year of the Pandemic. Maryland, my Maryland. Packaged goods stores have been allowed to open, but restaurants statewide have been subjected to some of the strictest coronavirus-related shutdowns and limitations around. At the same time, thousands of everyday heroes have been putting themselves on the front lines of healthcare, law enforcement, and community service.

Jane Springer, Executive Director of the Maryland State Licensed  Beverage Association (MSLBA) recalled, "It really just started from an e-mail we sent out to all of the members to see what they were doing to protect their customers and help in the community. We started getting information about people who were donating meals and helping to support frontline workers. We started sharing those positive stories and got the idea to help out all around. Many of our liquor store members were doing fairly well, but some of the restaurants obviously were not. 'What can we do to help each other and the community?' we asked. Jeri Zink got the ball rolling."

Zink, Executive Director of the Baltimore County Licensed Beverage Association (BCLBA), recalls that when the pandemic started really taking hold earlier this spring, it quickly became clear how badly it was going to affect healthcare and local businesses and how disproportionate the impact was going to be on restaurants.

"BCLBA members were strongly voicing the desire to do something," Zink said. "Liquor stores were deemed an essential business. So, they actually saw an increase in demand, whereas restaurants had to resort to carryout and delivery just to have some income to support their staff. We designed our initiative to allow the liquor stores to make meal donations to their local healthcare workers, but purchase the meals from local BCLBA member restaurants. So we're supporting both our healthcare heroes and also our members." 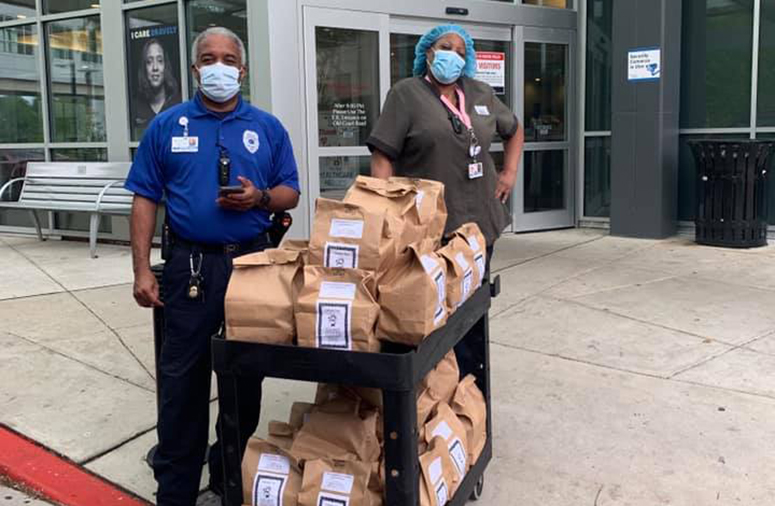 Dugans Liquors and Firehouse Tavern teamed up to deliver dinner from Monaghan's Pub to LifeBridge Health.

The association made it a social media challenge in order to create visibility and awareness for its members' efforts. Zink added, "And also because we know our members are naturally competitive and would want to get involved if they saw their peers participating."

And participate they have! Marty Kutlik, owner of Ridgely Wines & Spirits, remembered receiving a call "out of the blue" one day from Zink with her idea.  "Genius!" he exclaimed. "Two good deeds at once. Jeri had BCLBA challenge Ridgely Wines & Spirits to buy lunch for one of the Saturday afternoon shifts at St Joseph's Hospital in Towson [approximately 55 lunches, as it turned out]. My preferred on-premise colleague to perform the catering was Casa Mia's of White Marsh.  As we accepted and met the challenge, we then tossed the next challenge to Cranbrook Liquors to do the same." 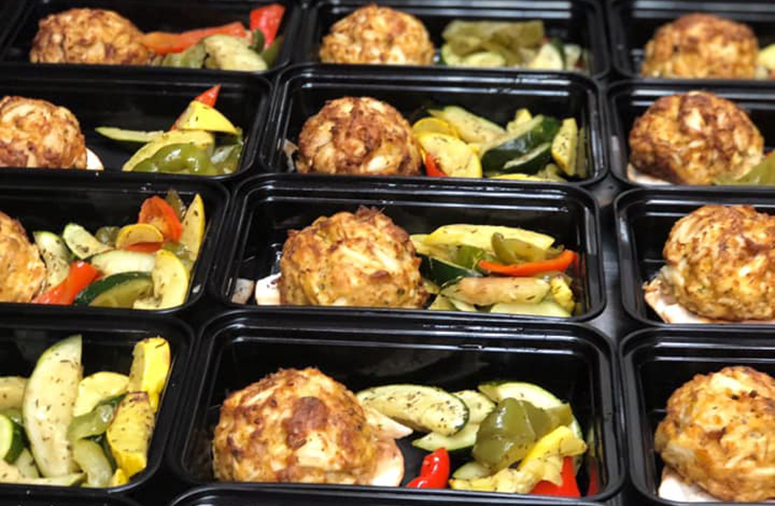 He continued, "From there, the challenges continued. Jeri coordinated. She kept it going! Last I heard, other counties wanted to duplicate the initiative. It doesn't get any better. And while there are many opportunities throughout the year as an off-premise licensee to give back to the community, this was very timely and particularly gratifying."

Joe Carolan of Casa Mia's said his establishment was delighted to be part of the #BCLBAMealsForHeroes challenge. "Our philosophy is always to give back to the community in a time of need," he remarked. "When we realized the amount of time and dedication healthcare workers were performing, it was natural for us to donate crabcakes."

The initiative did indeed expand to other Maryland counties, chiefly Anne Arundel. Becky Ebner of the Anne Arundel County Licensed Beverage Association (AACLBA) remarked, "We kind of copied BCLBA's challenge, but changed it up a little bit and called ours the 'AACLBA Support for Heroes Challenge,' because some of our establishments made other donations besides meals to hospital workers. AACLBA does not have a Facebook page, so we used the MSLBA Facebook page to post the challenges. The association president, Joe Gray from Festival Wines & Spirits, started by donating meals and then he challenged the next person."

That next person was Kim Lawson of Fishpaws Marketplace. She got particularly creative and opted to give the gift of the grape. "We sent 175 gift bags with a bottle of Pinot Noir and a box of Wockenfuss chocolates to Baltimore Washington Medical Center Critical Care/Covid Unit doctors," she said."We were indeed challenged by Joe Gray at Festival, and we forwarded the challenge to Bay Ridge Wine & Spirits."

David Marberger, owner and operator of Bay Ridge Wine & Spirits, stated, "We accepted the challenge and donated $1,000 to the Anne Arundel County Food Bank. We didn't do it to benefit ourselves. We did it more as a service to the community. There are a lot of people who have lost their jobs -- a lot of restaurant employees, a lot of hotel workers, a lot of service industry people -- and they've needed to take advantage of such social services. The food banks are getting decimated. If we could help restock those food banks in some way, shape, or form, we thought that would be a good thing."

Not to be outdone, Hops & Vines proprietor Amrish Vyas donated 33 restaurant gift cards totaling about $1,000 for the month of May and June each (66 gift cards total) to the various "Healthcare Heroes" that live in his store's immediate area of Piney Orchard. "We bought gift cards from our neighbor -- Mamma Roma, an Italian eatery -- to help them out in their business during these challenging times," Vyas noted.

Vyas' friend and colleague Bimal "Bill" Katwala of Sun Valley Liquors also rose to the challenge, "I have provided 100 meals to the staff of the COVID-19 floor at University of Maryland Baltimore Washington Medical Center in Glen Burnie. We had also donated $900, which was the proceeds from selling hand sanitizers to Maryland Food Bank."

Ebner credited Dan Donnelly and his staff at Donnelly's Dockside in Arnold, Md., for getting the meals organized for the different departments at the hospitals and delivering them. Julianne Sullivan, operator of Bella's Liquors, also gave high marks to Donnelly's Dockside in helping her provide crabcake meals to five different first responder locations in her store's area. "We provided our meals to the Arnold Volunteer Fire Department, the U.S. Naval Academy Fire Department, the Department of Natural Resources, and Maryland state police at the Bay Bridge and the Cape St. Claire Volunteer Fire Department. We also had a box for customers to drop off hand-written cards, letters, or store-bought cards, and we gave them to the first responders we served."

Paul King from King Liquors in Baltimore stepped up and furnished meals for the COVID-19 unit at MedStar Franklin Square Medical Center in Rosedale. His reasoning? "I know in an emergency, pandemic, or any other situation, the staff at Medstar and all of the first responders will be there for all of us." 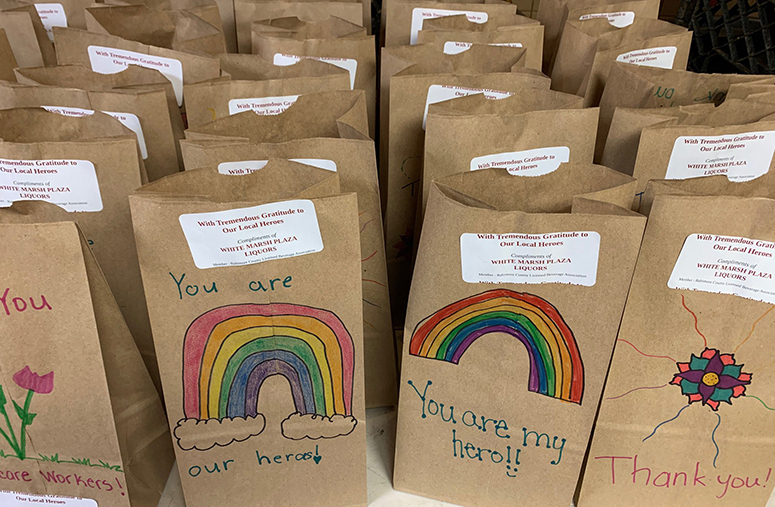 And for the various packaged goods store owners and restaurant operators, the benefits went far beyond just "feeling good." According to Zink, "It's created substantial recognition of what we've always known: that local businesses like to give back. By creating this as a social media challenge, we're able to leverage the followers of all of these restaurants, liquor stores, and even hospitals, who are all sharing and commenting on each other's posts. For example, one picture of Casa Mia's crabcakes generated thousands of impressions. So now thousands of people recognize how delicious their crabcakes look, but also that they're dedicated to their community."

Casa Mia's Carolan concurred, adding, "Many of the healthcare workers were already existing customers. We received many calls thanking us, which also helped boost employee morale. Responses from our crabcake picture on Facebook received over 3,000 views, as well."

Sullivan of Bella Liquors has also taken full advantage of social media. "We posted pictures of some of the men and women we served on Instagram and Facebook and received a ton of positive feedback from our customers and the first responders we served," she noted.

Vyas  and his staff also got back just as much from the community as they gave to it. "Although we did this simply out of our need to be a good member of the community," he said, "we have gotten countless 'Thank You' notes and appreciation messages for doing what we did. We are proud and happy that, at this time of need, we were able to help."

Zink concluded, "It’s also brought awareness to something that is pretty unique to local businesses, as opposed to the big chain retailers. Local businesses are really a part of their communities. They understand their communities' needs in a way that big chains just aren't set up to understand. The restaurants have also been very appreciative of the business, but they would have been involved even if it wasn't benefiting them. For instance, when I called Bill's Seafood, and told him about the initiative, he said, 'Sign me up! How much should I donate?' And I said, “No, Bill, this is to benefit your business, as well! We’re paying you for the food!"