A Beverage Biz Look Ahead ... The 2022 Legislative Session 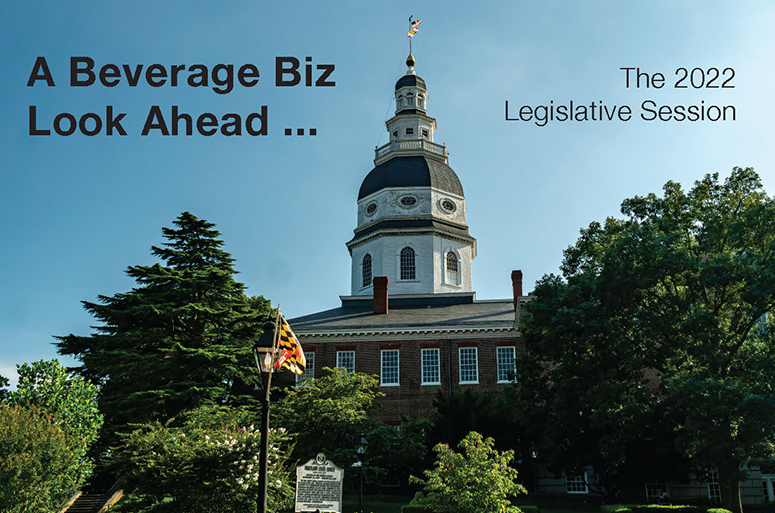 With new variants popping up, it’s clear that the coronavirus will be a factor in all aspects of our lives for some time to come, whether it’s personal or professional or political. But the wheels of government grind on. I’ve been penning these annual legislative update features for the Beverage Journal for a decade now. Last year’s edition was unlike any I had ever written up, with 2020 being the birth of COVID-19 and the absolute height of business restrictions statewide.

So, with the vaccines and booster shots and eased government policies, was 2021 really any better? Compared to 2020? Of course, it was! But two years of this now are starting to constitute an “era.” And Annapolis has adapted to these times, as have beverage industry interests looking to have their voices heard in the state capital.

For this year’s update, the two Legislative co-Chairs of the Maryland State Licensed Beverage Association (MSLBA) agreed to go on record and chat about the year ended and the year to come. David Marberger of Bay Ridge Wine & Spirits in Annapolis proudly declared, “This past legislative year, we were able to defeat chain stores from being able to sell alcoholic beverages. They were trying to disguise it as ‘food deserts,’ a term we have to deal with from now on, I guess. One of the arguments was that there are some underserved areas throughout the state that don’t have access to quality food, fresh fruits and vegetables, good meats, and so forth. In an attempt to lure supermarkets and grocery store chains into those areas, there was a bill proposed that would have allowed alcohol sales in grocery stores to help bring national chains to those ‘food deserts.’ From a public health perspective is the angle, I guess, they were taking. Fortunately, we were able to defeat that.”

MSLBA’s other Legislative Co-Chair Jack Milani also applauded the victory. But he acknowledged that the discussion about supermarkets, grocery stores, and other chain retailers like Target selling beer and wine will certainly come up again. “It is a constant and never-ending battle that I am sure we will have to look for in 2022,” he remarked. “Last year, there was also an attempt at an alcohol tax increase. I’m not sure if we’ll see that again. But if it does come around, we’ll be ready for it. I don’t know. Maybe in the year to come in Annapolis, it will be other businesses and industries in the headlines.  That’ll be fine by me!”

Nevertheless, Milani and Marberger are indeed prepared for battle, and they want others to be ready also. So, too, does attorney and MSLBA lobbyist J. Steven "Steve" Wise, who noted that beverage industry interests should be particularly aware that the year ahead is one where voters will eventually be going to the ballot box. He said, “It may not be on people’s minds yet, but 2022 is an election year in Maryland where the statewide offices of Comptroller, Attorney General, and Governor are all up, as well as all 188 seats in the General Assembly. That will be in the backdrop of everything that occurs for January all the way through the election in November.”

Milani, proprietor of Monaghan’s Pub in Baltimore, added that the bigger picture may be comprised of smaller snapshots. “Some of the issues that go under the radar each year are local issues, county by county,” he explained. “That brings to mind the importance of every retailer to get involved at the local level. You should not only get to know your elected officials and talk to them well before session even starts ... also attending your liquor board hearings. Everybody should be doing that. That’s when you hear these things first pop up that no one else knows about. The only way you are going to find out about it is if there is someone there at the meeting to hear what’s being proposed. Then, you can possibly stop it at the very beginning if it’s going to be detrimental to the rest of the state. Most things start out on the local level and they turn into a statewide issue.”

Another issue that will likely draw attention in 2022 is direct shipping, specifically from distilleries but wine and beer also. “As retailers, when we open our doors every day, we are susceptible to stings and undercover operations,” explained Marberger. “With direct-to-consumer, there are very little – if any – compliance checks. How do you make sure packages are delivered only to those people who are 21 years of age or older or make sure the person who ordered it is 21 or older. There is none of that. It’s certainly not a fair system, and there could be a lot of underage people getting their hands on alcohol that way.”

One positive that all three men say has happened in the COVID era, and that they are hopeful will continue, is state legislators becoming more sympathetic of the plight of small business owners and their importance to the communities these elected officials serve. Milani said, “They’ve heard from a lot of folks who have talked about small businesses and the importance of looking out for them. We just hope they keep that same attitude and urgency once COVID passes, where they do look out for the small, independent-owned, family-owned type businesses. Hopefully, they saw how much the general population was supportive of their small, local businesses during troubled times.”

He continued, “I had customers who sent checks to our waitstaff while we were going through the worst of COVID. A lot of people tried to help, and a lot of legislators saw how small businesses have that connection with their neighborhoods. When you live in a neighborhood and work in a neighborhood and that’s where you are from, you have a different sense of how things should operate. I do think legislators enjoy hearing from regular folks. They hear from lobbyists all session long. They need to hear from the people who are actually doing things every day in their communities.”

Marberger concurred, adding, “Last year was not a typical year in terms of the Legislature. Everything was done virtually. You couldn’t roam the halls and see your legislator and talk to him [or her].  But I do think there was increased opportunity for all of us to work with the Legislature to make whatever changes or tweaks needed to come, such as drinks to go. I personally had a difficult time seeing our business boom so much while our neighbors – specifically the restaurant operators – were dying on the vine. Retailers didn’t do anything right or wonderful to warrant doing all of that extra business, and restaurants didn’t do anything wrong to warrant having to fight for their lives. Drinks to go was put together to help those on-premise accounts, and that was done with constant communication with our elected officials to craft something that would get them through the times, but eventually have to sunset.”

As for what’s ahead, both Milani and Marberger cited a certain amount of fatigue trying to plan for what challenges await their businesses even a week from now, to say nothing of what will come during the entirety of the new year.

Milani commented, “I’m cautiously optimistic. People are certainly going out more to restaurants. Hopefully, more people will be going into their offices, and that will help restaurants with their daytime business. We’re all just hoping the vaccines stay ahead of the virus, and we can continue to try and return to normal. Again, if this article could stress one thing, it’s the importance of getting the retail community to try and form relationships with their elected officials to the point where they know who you are, they actually expect you to call them about certain issues, and maybe they’ll even reach out to you and ask your opinion on those same issues.”

Marberger remarked, “I’ve stopped trying to guess what’s coming next in this industry. I think things are going to get worse on the supply chain side before they get better. We’re still experiencing a lot of out-of-stocks and limited quantities. All of the shipping costs have doubled even tripled for products coming from overseas. Even products that are being moved around the country domestically are getting more expensive. So, we’re going to start seeing higher prices. It will get worse before it gets better . . . but I do hope it gets better soon!”

Wise is still buzzing over the successful year just concluded that the beverage industry had in Annapolis and is hoping the momentum will carry over to 2022. “We were able to defeat the beer and wine in supermarkets bill, and there had been discussions about increasing the alcohol tax, and that turned out to not happen. Given the great uncertainty we went into last Session with, we came out tremendously well. I’m cautiously optimistic for the year ahead.”