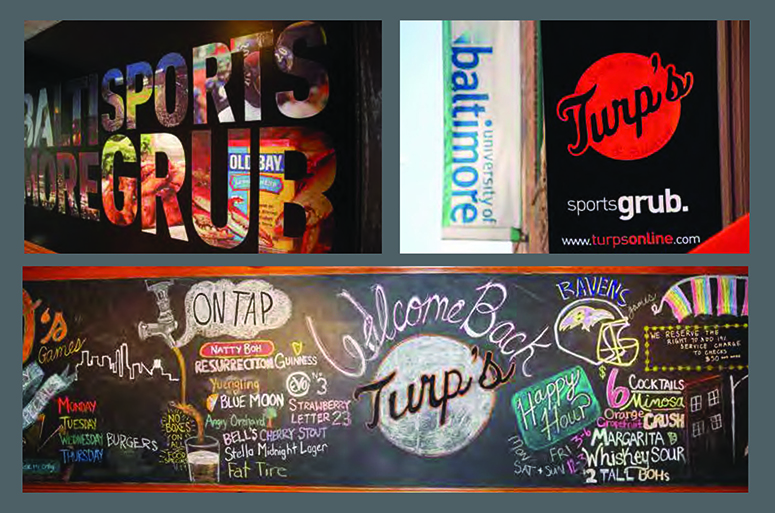 As part of our ongoing series of theme bars and restaurants in and around Maryland, there is no more prevalent theme in this state or any state than the classic sports bar. And one of the best is Turp’s Sports Bar & Restaurant in Baltimore. Located in a historic Mount Vernon brownstone and named after one of the original managers whose last name was Turpin, Turp’s has been wooing Charm City sports fans since opening over a decade ago with a large selection of beers and cocktails and a food menu that includes everything from pizza, calzones, and chicken wings to sandwiches, subs, and create-your-own burgers.

Running the place for the past three-plus years is General Manager Brad Bloom, who grew up in the industry under the tutelage of a father (Jay’s Restaurant Group founder Moe Bloom) who’s been in the bar, restaurant, and catering biz for over four decades. Bloom believes Turp’s reaches far beyond the casual and die-hard Ravens and Orioles fans.

“One of the great things about Turp’s is that it’s a neighborhood-friendly restaurant,” he said, during a recent interview with the Beverage Journal. Yes, ‘Sports Bar’ is in the title. But we try to give off a great vibe for everyone. Whether you are a student or a little kid or a couple going to a show in the area or a diehard O’s fan, there is something for everyone here . . . and a big part of that something is a neighborhood feel.”

He added, “At the same time, of course, we focus on sports. We have DirecTV packages. Wherever you sit in the restaurant, you can ask to change to any specific game that you want. We have a TV personalized for every single table and booth.”

Turp’s also has a great selection of local sports memorabilia displayed throughout as its primary décor. What is Bloom’s favorite item? “I grew up idolizing Cal Ripken,” he said, “so I couldn’t tell you what Ripken piece we have that is my favorite. We have quite a few. So, hands down, anything with Cal is something I’ll always have my eye on. He just symbolized and embodied the blue-collar worker, of everything you go to work for every day.”

Bloom continued, “We hope to keep adding, especially with all of the local sports in the area – the Ravens, the new crop of Orioles, etc. There are a couple of jerseys we have – one signed by former Ravens linebacker Ray Lewis and the other a Lamar Jackson jersey – that are right there in the front [of store] that are generally the favorites. People see them when they come in. We get the most comments on those and they bring a lot of smiles.”

Like many establishments, themed or not, Turp’s was affected by the pandemic and the slow and measured rebound since. While many eating and drinking places lost staff, Turp’s used the crisis to place greater emphasis on team. “One of the biggest changes was with the staff,” Bloom noted. “We all had to become ‘hybrids.’ You weren’t just working one position anymore. You’re working multiple positions. It wouldn’t have been possible to survive these last couple of years without this team and the chemistry we have had. We pick each other up and we work different positions where needed. That was the biggest change COVID brought. No one is just a server or a bartender or a barback or a cashier anymore. Everyone sort of moves around and works as a team.”

And what a surprise it’s been to emerge from a pandemic to find a Baltimore Orioles team suddenly very competitive and in the hunt for a wild-card playoff spot (NOTE: this interview was conducted in early August with the O’s on a four-game winning streak and a record of 55-51). Has the Orioles’ success translated into more customer traffic for Turp’s? Bloom was quick to answer: “We are still experiencing the comeback crowds from the slowdown we had during COVID, so it’s hard to say specifically. With the Orioles right now, I can tell you that the excitement is definitely a thousand times greater than it was the past few years. We’re definitely seeing it at the bar, getting more and more requests to have the Oriole game on.”

It helps that the bar has an exceptional beverage menu that keeps customers coming back for more. There are as many as 10 beers on tap at all times. “I try to rotate out, but we have our staples,” he said. “In this area, [laughing] you can’t NOT have Natty Bo! But we also keep on the menu Blue Moon and Yuengling. We have some local brews, too, like Brewers Art Resurrection and Dogfish Head Sea Quench Ale.”

In terms of cocktail drinks, Turp’s has a lot of the classics. But they have been tweaked and given funky names to spice them up a bit. They include a Turp’s Old Fashioned, the One Punch Drunk, Charm Titties, and Miami Ice. “We have a bomb on the menu, which I never thought we’d have,” Bloom added. “But we listened to our customers. It’s called a Robo Bomb, and it’s very popular with the regulars. It’s important to listen to the people you serve and the people you work with. Always keep an open ear. That really helps you build on things.”

Looking ahead, Bloom has a positive outlook as he and his business head into the fall and the fourth quarter of 2022. He concluded, “I always like to keep an optimistic viewpoint, regardless of what’s going on in the world. You always have to adapt and swerve. Whatever happens, we’re going to adapt and we are going to survive. That being said, I’m truly excited about the rest of the year. We have the college students who are going to be full-force back in classes. There will be more people walking around on the streets. It won’t be as deserted as it has been during COVID the past few years. And, yes, the Orioles! Hopefully, they’ll stay in [the chase for a playoff spot]. Then, people will really start believing. The Ravens are coming back, too. So, we’re on the right track.”