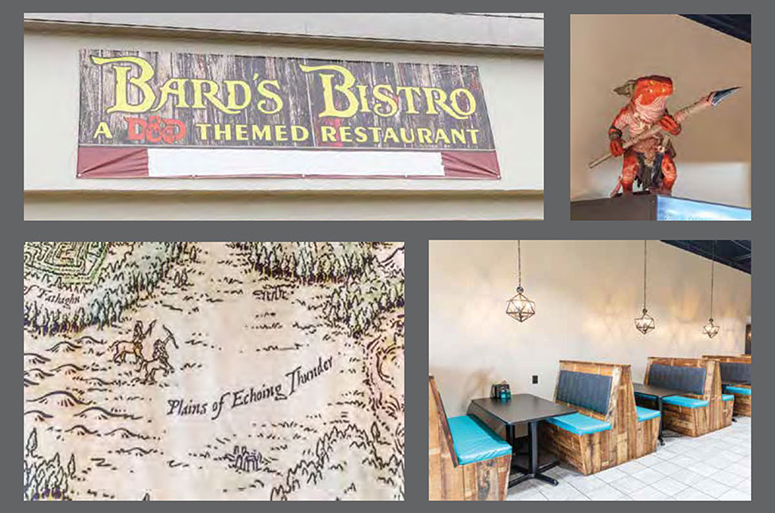 These days, people will sit around a bar or restaurant and go back and forth about everything from sports to politics to the Kardashians. At the new Bard’s Bistro in California, Md., most of the customers are bandying about who is going to be Dungeon Master and what each players’ ability scores are going to be. Yes, Bard’s Bistro is a “Dungeons & Dragons”-themed eating and drinking place. Actually, it is meant to cater to gamers of all types and persuasions. But “D&D” more than anything.

Owner Rebecca Ali opened Bard’s earlier this year as an extension of her High Tide Games store that she has been operating since March 2013. During a recent interview with the Beverage Journal for our ongoing series on themed bars and restaurants around the state, she remarked, “What makes this different is that I already knew many of the people who would be my customers before opening. Yes, they’re my customers. But I know them like they are family. I know that sounds cliché. But I really feel connected to this group of people. So when I was looking to come up with the concept for the restaurant and figure out the menu and everything, I wanted to have food and drinks that I would be proud to serve my family. It’s been a journey, but I’ve stuck with that [basic philosophy]. I’m a part of this community, and I want to make it better.” 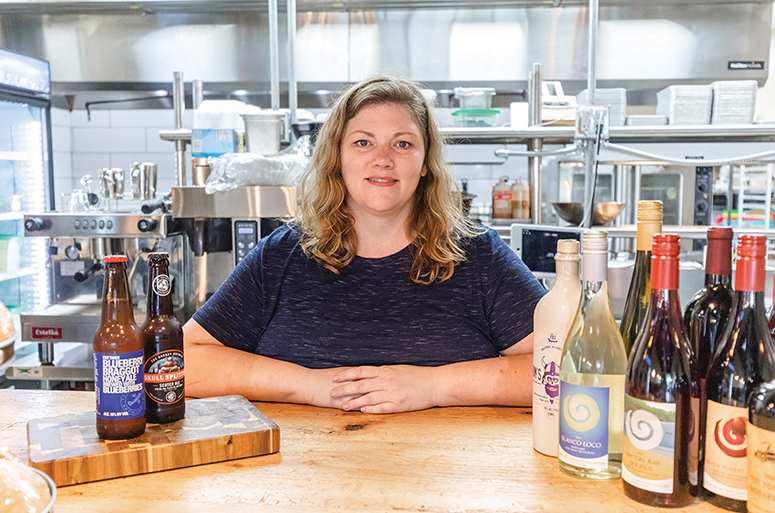 High Tide Games welcomes gamers of all ages and playing abilities. It features a large open space for them to learn, play, and compete in card games, board games, role-playing games, and table-top miniature games. The store also offers a separate room for holding private games, parties, or classes. Ali wanted Bard’s Bistro to be just as inviting. And, indeed, the interior feels like you have stepped into your favorite game of “D&D.”

“Everybody knows about ‘Dungeons & Dragons,’” Ali said. “It’s a table-top role-playing game. It’s very fantasy-themed. We have a big community here locally of ‘D&D’ players and it’s growing. A lot of younger kids and people have gotten into it, and even that crowd is growing. The whole ‘Stranger Things’ [a popular Netflix show that has incorporated the game into its overall story arc since debuting in 2016]. phenomenon really put it into overdrive. When I was going to expand my business and open the restaurant, I thought, ‘What better way to connect the restaurant to the store than to make it a Dungeons & Dragons theme?’ One of the most popular things in ‘D&D’ is at the beginning of the game, you go into your local tavern. You’re sitting there, somebody approaches you, and they give you a quest to go on. It’s a part of the game, and it lends itself well to some fun in the real world.”

The theme has led to fun and creative business choices for Ali and her crew, too. The menu design is one example. There is the “Sharpshooterie Board” instead of the charcuterie board for an appetizer. Other food selections include the Adventurer’s Salad and the Barbarian Pretzel.

As for beverages, the fun continues with some equally fun libations. “With people here for several hours, serving drinks is a good idea,” Ali stated. “They can relax and not have to worry about driving five minutes later. The drinks are fairly new to us. We just got our liquor license last month [this interview was conducted the last week of August]. I’m trying to stick to what a D&D tavern would be like. Some of the beers that I have on tap are not your traditional domestic beers. I don’t have Bud Lite or Blue Moon or any of that stuff. I have things like a Smores stout and a vanilla barrel ale and a blood orange IPA. These are all drinks you might find if you walk into a tavern in a D&D game.”

She continued, “Then, I have some bottles of what you’d call ‘mead,’ which my distributor told me, ‘We don’t sell mead very often. Everybody that’s tries it doesn’t sell it.’ And I’m like, ‘I feel like I can sell it.’ And [laughing] we’ve been through cases of mead! We have a scotch ale that has a really high alcohol content, but it’s smooth and people are really loving that one. I also have some wines I’ve brought in from the local winery, Port of Leonardtown. And our mixed drink menu has been a lot of fun. We’re serving them in potion bottles like you would have in a game. In some games, you buy a potion, you drink it, and something would happen. So, we’re doing fairy bottles and Alchemist’s Fire and the Potion of Healing. There’s so much you can do with the theme that it’s really fun.” 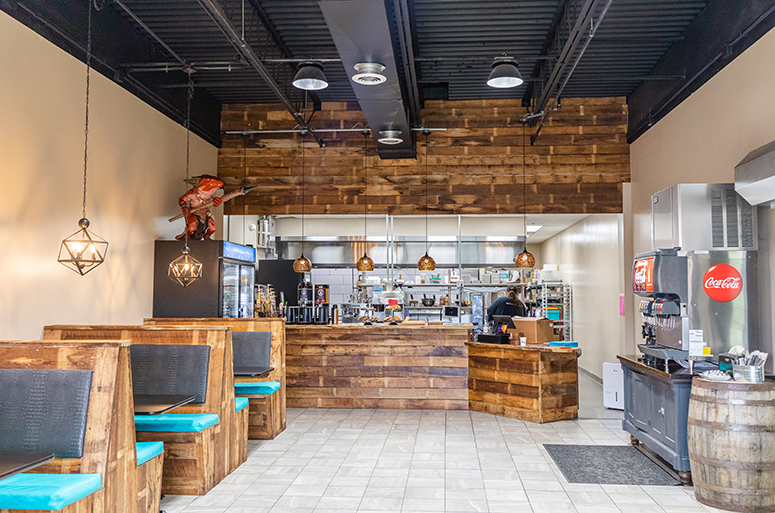 And how did Ali find the process of obtaining a liquor license? She was quick to answer: “Here in St. Mary’s County, it is a process. But if you go through it step by step, it’s not impossible. There is training and background checks. There is a petition and you have to have the community sign off on it. There’s lots of paperwork. And then you have go before the alcohol beverage board, which is made up of elected officials. It was a very formal meeting and a bit intimidating. There is an administrator for the board, and she sets up the initial meeting and lays out everything you need to do. When you have questions, she answers them for you. So, she was really helpful. It was just a matter of going through all of the procedures.”

From a distance, one would assume that Bard’s Bistro’s clientele is somewhat limited. But that is not the case, according to Ali. Yes, she was able to start with an already loyal customer base. But in the months since opening, she and her staff have noticed a growing diversity among the paying public.

“Mix is a good word for our customers,” she said. “People come into the store to play games. They are usually there for several hours at a time. And every day of the week, it changes. Wednesdays are D&D. Fridays are Magic the Gathering [a strategy card game]. Sundays are Pokemon. Every single one of those events that happens every week has a different crowd that it draws in. Pokemon tends to be younger. D&D is sort of all across the board. Magic is mid- to late-20s. Board gamers tend to be older. Also, we are right near a Navy base. So, we are getting the lunch crowds from the base. I’ve also noticed a lot of people wandering in from the community because they’ve heard our food is good.”

Looking ahead, Ali expressed positivity as her most pronounced real-life super power and ability. Part of her charm is that she never considers herself a business person. Her background is actually in computer programming. But she sounded very much like an entrepreneur when she offered this bit of advice: “One thing that someone told me early on, and it’s stuck with me, is ‘Just focus on making money.’ That sounds silly. But it’s really easy to get caught up in ideas and lose sight of how to make those ideas happen, which is by having money. Whatever it is you are doing is fine . . . as long as you are making the money!”