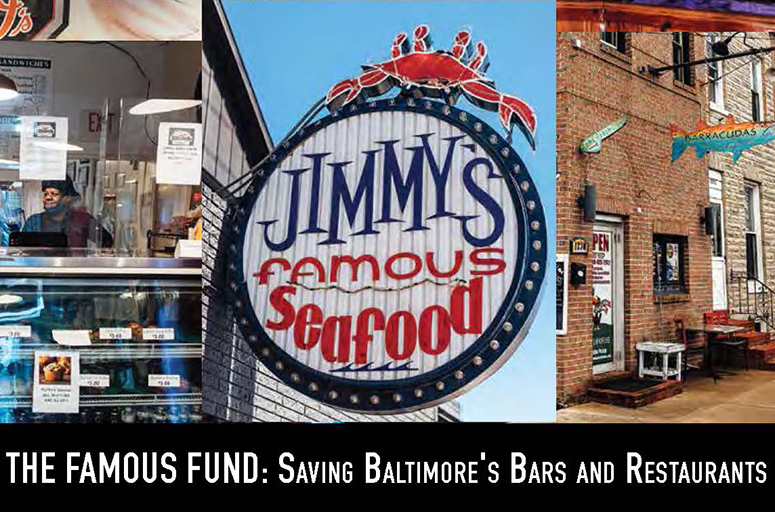 Across Maryland, bars and restaurants are hurting. Among those who have been hurting the worst are those in Baltimore City where Mayor Brandon Scott has imposed some of the tightest restrictions and longest lockdowns in the state. To the rescue has been The Famous Fund, which has been disbursing thousands of dollars to eating and drinking places in Charm City -- and garnering national headlines for doing so -- since its inception back in January.

The fund started as a wager between John Minadakis, owner and President of Jimmy's Famous Seafood, and Barstool Sports site owner David Portnoy, who is currently doing a national fund in support of struggling eating and drinking places. The bet was on the Baltimore Ravens vs. the Buffalo Bills playoff football game back on Jan. 16. If the Ravens won, Portnoy would have saved one restaurant in the city of Baltimore.

Although the Ravens failed to achieve victory, the bet and concept inspired Minadakis to start the Jimmy’s Famous Seafood Fund to help many establishments in need during the ongoing lockdown. He launched the fund on GoFundMe.

"The most rewarding part of this whole experience has been seeing hope personified," Minadakis said, during a recent interview with the Beverage Journal. "It's been a brutal year for everyone in our industry. And it has been a year now. Every time we've seen a little bit of light at the end of the tunnel, it just gets taken away from us it seems. And along the way, our industry became vilified. To see people caring about us in such a positive fashion and stepping up in such a major way, it just shows you how important these restaurants and bars are to the everyday citizens. So many have come to the realization that without their immediate reaction and financial action, their favorites might not be there once things get back to 'normal.'"

He added, "It's been very humbling to know you really are appreciated, especially as  you're putting in those 16- to 20-hour days. Sometimes, you don't know just how much you really mean to your customers."

One of the first recipients of the fund was Simply Marie's, a breakfast eatery in Baltimore's Canton neighborhood that initially received $10,000. Former Orioles All-Star outfielder Adam Jones, who was a regular customer back in his playing days, Zoom-called owner Marie Branch personally to tell her she won the award. He then added another $10,000 of his own money.

Branch, who just celebrated her 10th year in business, recalled, "[Former mayoral candidate and Famous Fund board member] TJ Smith called and said, 'Someone wants to talk to you. Someone amazing.' And he added, 'You'll find out in the morning.' I was like, 'Yeah, whatever.' But I also told my son that 'there was nobody in Baltimore other than Adam Jones who'd surprise me, but he lives in Japan now.'"

After learning how to download and take part in a Zoom call, the next morning she opened the app and indeed saw . . . Adam Jones! "I lost it," she exclaimed "I just completely lost it." And when she found out that Jones had matched the $10,000 donation from the Famous Fund, "I just started crying. I've now paid my rent all the way up to the summer! In addition to the donors, I also want the Beverage Journal readers to know that I really appreciate my Canton neighbors helping me to keep my place open! Without them, I wouldn't still be here."

Minadakis remarked, "Just to see the relief come over her face on that Zoom call and the pure excitement . . . that's one that really stood out. And with Adam stepping up and giving her an extra $10,000, that was a life-changing call for a lady who has poured her entire life into her establishment. She was truly worried she was going to have to close her doors for good. But because of the Fund, she has not only paid her rent, but she's attracted new customers because of the attention the Fund has garnered. That's why we don't announce the recipients all at once. We release them every two or three days to give each place two or three days in the spotlight."

South Baltimore restaurants Pickles Pub and Barracuda's are among the more recent businesses to receive windfalls from The Famous Fund. Pickles Pub in the Ridgely’s Delight neighborhood of Baltimore received $15,000 and found out during a call from 105.7 The Fan’s Jeremy Conn. Pickles owner Tom Leonard's staff, past and present, submitted a heartfelt video to be eligible. In the video, they described the challenges of the past year, but also spoke to the drive Leonard has had through the struggles. They went into detail about some of his efforts. Last Easter, for instance, Leonard and his daughter dressed up as Easter bunnies and delivered baskets to his employees. Additionally, being located next to University Hospital, Leonard has often kept the kitchen open late for the doctors and medical staff.

Leonard remarked in a late February interview, "We just got the first disbursement. My partner and I are going to give as much as we possibly can to our staff. It was our staff who submitted the videos. We wouldn't have the money without them, so it's only right they get it. The business means so much to me. We are the pre- and post-game bar for the Ravens and the Orioles. We're literally across the street from Camden Yards. We've been in business since 1989, before the stadium. I was a customer before becoming an equity partner. I never thought, way back in the day, when I was a patron at Pickles that I would one day own the place!" 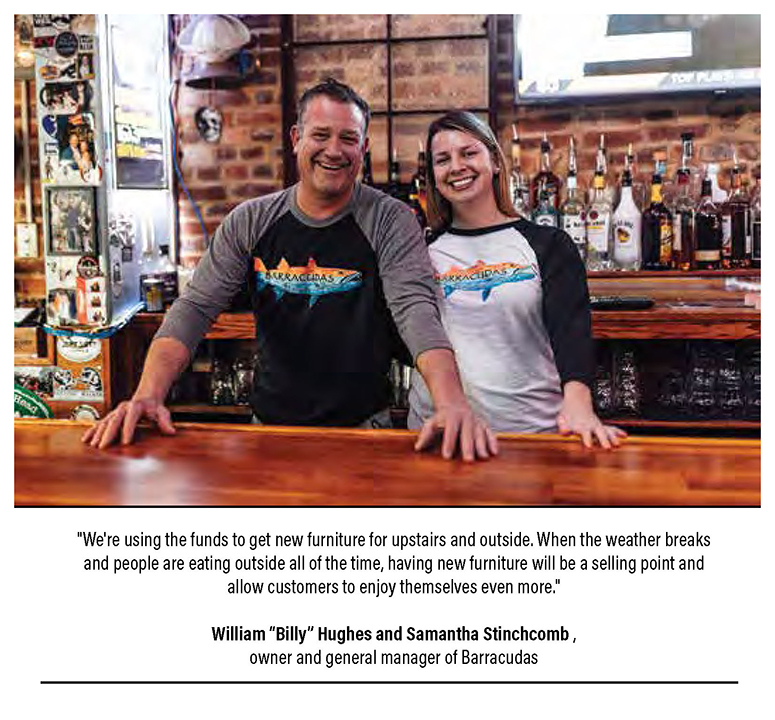 "I knew we were getting it, but Billy didn't," Stinchcomb recalled. "So, seeing him be genuinely surprised and then having that overall feeling of relief that it brought and knowing that our hard work was being recognized and appreciated by people who share similar values was really fulfilling for us."

She continued, "We're using the funds to get new furniture for upstairs and outside. When the weather breaks and people are eating outside all of the time, having new furniture will be a selling point and allow customers to enjoy themselves even more."

Other restaurants helped by the Fund so far have included the Angle Inn, The Chasseur, G&A Restaurant, Illusions Magic Bar on Federal Hill, Shotti’s Point, and Sliders Bar and Grill.

Rachel Sheubrooks, proprietor of Sliders, stated, "My first reaction was extreme appreciation. I've never been one to ask for handouts. But I always loved owning a restaurant and bar where I could treat people to a meal -- friends, family, etc. Now I am charging my friends and family every penny just to stay afloat. To finally get something back was absolutely fantastic. It made me cry. I haven't been to Target in the last year to buy a T-shirt. We haven't even turned the heat on for the entire winter. So, we're using the funds to pay bills like our mortgage and the electric." 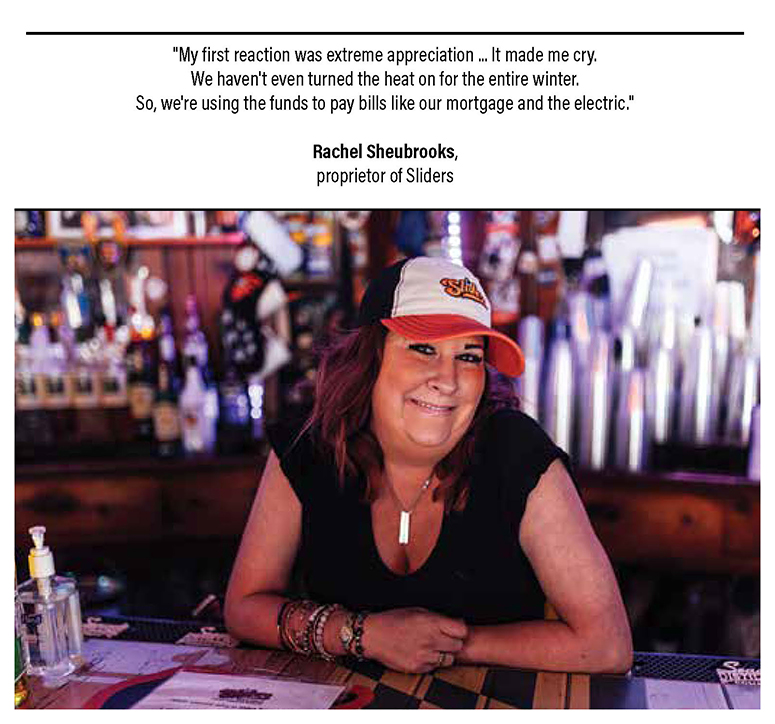 The Famous Fund has gotten the attention of some famous folks. In addition to Adam Jones, Duff Goldman, and TJ Smith, the Baltimore Ravens' Marlon Humphrey, Ronnie Stanley, and General Manager Eric DeCosta have gotten involved as has CNBC's Marcus Lemonis, who donated $20,000. Organizational contributors to the fund have included the Baltimore Orioles and Advance Business Systems. In addition, the Famous Fund now falls under the umbrella of former Ravens kicker Matt Stover's player philanthropy fund.

The big names have definitely helped in getting the word out. And for Minadakis, it's all about the messaging. "The biggest challenge has been making people aware of just how dire some of these situations are," he said, "and how desperate some of these places were for immediate funding. In some cases, they were just days away from closing for good. The $50 you donate pays one restaurant's rent for a day. So, you may not feel it's a big deal, but it is. It's actually a massive deal!"

Minadakis concluded, "I'm running out of words to describe the last year. I'm sure that anybody in my situation has had some definite bouts with depression and hopelessness. You're being vilified in some cases just for trying to provide an honest living for your family and employees. Personally, the Fund is making me remember why I fell in love with Baltimore and why I fell in love with the restaurant industry, as a whole. Theoretically, these are all places that are competitors. We're all competing for the same nuts as squirrels. But we're all uniting now and coming together, and the community is rallying around us. It's definitely changed me in the sense that it's restored my faith in humanity. I consider myself a pretty religious person, and it's really renewed my faith in God, too. There is a higher power at work. You just need to look a little harder than usual and you'll see it through the actions of everyday, ordinary citizens."

To learn more or to donate, go to www.gofundme.com/f/help-save-baltimore-restaurants-bars.