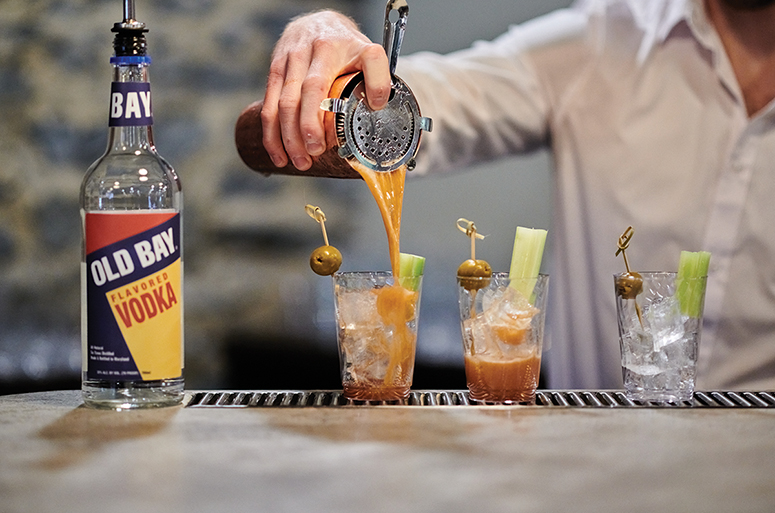 One of the more famous statements in Western philosophy is Socrates’ “Know thyself. The unexamined life is not worth living.” Greg David, CEO, co-owner and Chief Mixologist at George’s Beverage Company LLC, has come to know himself very well in recent years. He said in a recent interview with the Beverage Journal, “I’m an entrepreneur, which sometimes make me my biggest challenge. I’m the kind of person who likes to run through walls, break down barriers, and get something to market immediately. The biggest challenge is pulling myself back a little bit, slowing my pace down, and trying to see the bigger picture just so we don’t miss any important steps in the process. The process is the most important part.”

Distributed by Breakthru Beverage, Old Bay Vodka is made from corn distilled to six times purity and then flavored with the high-quality ingredients found in McCormick’s Old Bay seasoning. McClintock Distilling in Frederick, Md., is the distiller of record.

David stated, “We wanted to make a great vodka first and foremost. It just so happened that when we chose McClintock back in 2020, they had just been voted No. 1 Craft Vodka Distillery in the country by USA Today. We also worked with the flavor solutions team at McCormick. Their scientists asked us, ‘What are you looking for?’ And we said, ‘We want a vodka that will have the essence, smell, and taste of Old Bay, but for it to have a subtle hit.’ We didn’t want it to smack you in the face, but we definitely want people to know it’s Old Bay. So, they made a clear Old Bay liquid, and that’s what seasons the six times distilled vodka.”

He continued, “It’s 70 proof, which allows drinkers to taste both the seasoning and the alcohol. We tried 80 proof/40 percent. But it was just too high on the alcohol side of it.”

David believes Old Bay Vodka’s biggest selling point is its versatility. Indeed, a lot of flavored vodkas on the market are good for maybe just one or two different drinks. Old Bay Vodka is good in a lot of drink recipes. “One of the most exciting is the Bay Crush,” David declared. George’s marketing will also include drink recipes for such tasty concoctions as a Bay Martini, a Bay and Tonic, the Reel Bay Breeze, Bay Bombs, Bay Oyster Shooters, and more.

Old Bay Vodka is made and bottled in Maryland with a price point of $18.99 - $20.99 Each bottle contains 750mL and features the unmistakable colors and lettering of the classic Old Bay cans of seasoning you find at the grocery store or in many Maryland crabhouses and seafood restaurants.

According to David, “People will see the classic, familiar label and the packaging, and they know McCormick & Company is actually involved. This isn’t some license they’ve sold or outsourced. They’ve been with us every step of the way. In Maryland, Old Bay is a powerful brand. It resonates with people. So, we think people will be excited to try this.”

With Old Bay Vodka, George’s Beverage Co. continues its commitment to sustainable practices. One of the reasons David and his colleagues chose McClintock Distilling was its commitment to the environment. For instance, McClintock utilizes a closed loop cooling system that has reduced the amount of wastewater by at least 250,000 gallons per year. They’re also one of the few distilleries in the country that is 100% renewable energy powered.

Said David, “I grew up in this region. I spent most of my formative years in the Annapolis area and in Berlin, Md. So, I’ve grown up around the Potomac and Patuxent Rivers, the Chesapeake Bay, and the ocean most of my life. The sustainability of the largest ecosystem on the East Coast is massive to us.”