Feebs Distilling of Milford, Delaware, is looking to make inroads in the Maryland spirits market. It not only has the right products to sell, it has the right story to sell. Co-founder Eric Fibelkorn and his wife, Stacey Arnold, had dreamt of going into the beverage business. But it took Arnold’s cancer diagnosis in 2017 and subsequent survival to convince them that life is too short not to follow one’s bliss. Feebs Distilling, whose name is based on a Fibelkorn family nickname, was subsequently born.

In a recent interview with the Beverage Journal, she recalled, “I went through all of the radiation and chemo and ended up on this side of the dirt. That’s when we decided we were going to go for it. But we were not going to mortgage the house. We don’t have investors or bank loans. We do everything out of pocket. When we started out, we would buy a barrel when we had the money. So, we only had one, 30-gallon barrel to make bourbon. That obviously has changed. We now have 30 barrels aging in the distillery.”

The entrepreneurial couple hand-crafts small batch brandy and corn liquor. Most of their liquors are indeed classified as brandy by the federal government due to their distilling process and chemical makeup.

Arnold stated, “We have five flavored brandies and then the corn liquor. What’s the favorite? So far, there is not a top seller. I pull the report every Monday, and they’re still neck and neck. Peach is a fan favorite. My favorite is blueberry. Eric’s favorite is apple. We also have a strawberry and a blueberry brandy.” 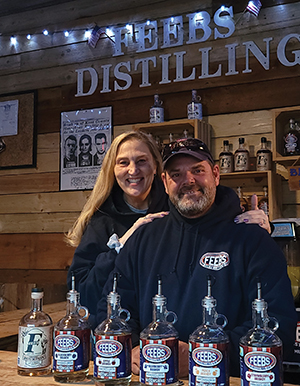 She continued, “We offer the most bang for your buck. We call it ‘real deal liquor.’ Craft is a whole market of its own. It’s never going to sell like Jack Daniels or Absolut. But there’s a whole market of people who appreciate what we do – the time, the cost, the ingredients, all of those things. We put in the work to create a product that is true to tradition.”

From the get-go, Fibelkorn has been insistent that all of Feebs’ liquors are made using the Tennessee method for making moonshine. Feebs Distilling gets all its fruit from Fifer Orchards in Camden-Wyoming, Delaware, and all of their grain is sourced from the nearby town of Laurel. Arnold said, “Our label says ‘moonshine,’ and we honor that tradition. So, if it doesn’t grow on the ground or on a tree, we don’t use it. We don’t use any artificial colors or flavors either.”

Feebs Distilling may be a relatively young company, but its first years in business have been a trial by fire. The business is located in an old warehouse owned by Penco Products. The couple rents the 1,762 square feet of space for the distilling process, along with a small tasting room they open on weekends for tastings and sales.

Most of its time in business, Feebs has been operating amid the pandemic. “We got started on May 30, 2019,” said Arnold. “By the time we had enough of everything to bottle and open the doors, it was the third week of December. People came, the business picked up in January 2020, and it was all going great in February. And then March happened, and everybody shut down.”

The husband-and-wife team immediately switched to a “call ahead-pay-curbside pickup” model. The result? Business went through the roof! She marveled, “Every time our governor extraordinaire went to give a new speech on the virus, people were like, ‘Oh my God. What if he closes down liquor stores? I usually get three bottles. But I’m going to buy five bottles!’ It was insane. Word of mouth really kicked in. People who couldn’t come in and sample ended up just buying our products. We stayed closed until September. Finally, when we did re-open, there was this whole new group of people who were suddenly our core customers.”

Feebs Distilling is indeed now looking to gets it products on the shelves of Maryland’s packaged goods stores. It helps that Arnold is a Maryland native, originally from Harford County. “I’m a transplant, who’s been here for 16 years,” she declared. “I still have friends from Maryland who come and get our liquor. It’s not unheard of any weekend to have customers from Dorchester County or Salisbury.  . . . What we’ve realized with Feebs Distilling is everybody wants good liquor, and they want it triple-distilled and clean so they can still get up the next morning and function.”