A Bev Biz Look at the 2020 Legislative Session in Maryland 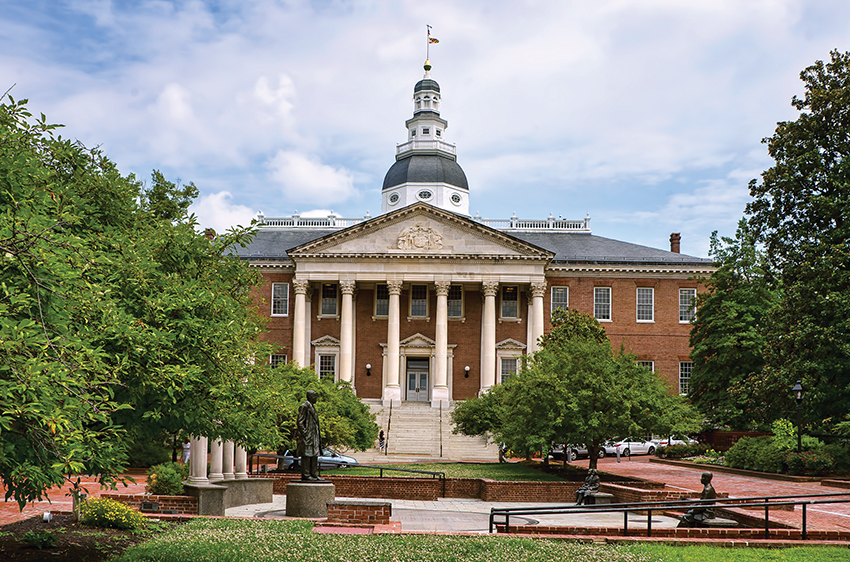 A year ago at this time, the Maryland State Licensed Beverage Association (MSLBA) and other small business interests were gearing up for a 2019 General Assembly where nearly 30 percent of the members were new. That was a lot of new flesh to press, a lot of new ears to tug, a lot of new hearts and minds to win over to our industry's issues and concerns.

But guys like MSLBA Legislative Chairman Jack Milani and attorney and MSLBA lobbyist J. Steven "Steve" Wise were definitely up to the task.  "It was a learning year for a lot of folks," the former conceded, "especially with regards to alcohol legislation. It can be a difficult learning curve, and we know that. So, we did our usual Lobby Day and made sure our members connected with their legislators. All we ever want is an opportunity to explain our side. Sometimes legislators agree with us. Sometimes they don't. At the end of the day, you just want to feel like you were listened to."

Wise agreed, adding, "I think the combination of our Opening Day reception that we do on the first day of session as well as the Lobby Day we do during the session coupled with the regular outreach of our members to legislators helped tremendously. But it's still a full-time job to educate lawmakers on issues that are important to us, because they have a thousand different subject matters to deal with. It's a tough job. So, it's incumbent on our folks to get out there and tell them what's important to retail, to alcoholic beverages, and to small business interests."

This past year, Wise said he and his colleagues spent a lot of time working through some modifications to the brewery law. The law's update was dubbed the "Brewery Modernization Act" and was one of two brewer-backed bills state legislators passed this year and Gov. Hogan signed into law. The second makes it easier for breweries to end or renegotiate their contracts with distributors, beginning Jan. 1.

"I think that was a success story for the whole industry," Wise said, "because we were able to come together with the brewers, the beer wholesalers, our retailers, and we worked out something that gave craft brewers the predictability they were looking for. But all concerned also recognized there had been significant changes to the structure of the industry.  Many people had entered the industry under a different set of rules. So, the changes had to be done in a measured manner to respect the existing rules of the game, but also reflect that the times have indeed changed. It truly was a compromise in the best sense of the word."

He continued, "We also worked a bit with a legislator this past year, Delegate Steve Arentz, who was trying to make some changes to the alcohol awareness laws to require that someone with alcohol awareness training be on premise at all times. His bill actually went a step further and said that, basically, anybody that serves alcohol on premise or off would need to have alcohol awareness training. We're working through that with him. So, that could be back on the table in 2020, but it's been a cooperative thing. He's been willing to hear what the industry has to say, but he's interested in enhancing those requirements. And we understand.

Now, with 2019 almost in the books, both Wise and Milani are looking forward to the challenges and (hopefully) successes of a new year. Wise noted, "We have been trying for some time to get a bill passed regarding underage sales and IDs. When it comes to underage sales, today's fake IDs are terribly difficult to identify because the technology has gotten SO good at creating them. The moment a state has passed a change in the look of a driver's license, somebody online has figured out how to reproduce a fake one. But the retailer is, of course, still directly held responsible for underage sales. So, we're trying to put scanner technology into the law that would say, 'If a retailer has used a certified technology to check an ID, they should be able to use that as evidence if there is an underage sale.' It would be part of their defense, but not an absolute defense. We haven't been able to get this done, but we're going to keep working on it in 2020."

Of course, MSLBA members are always on guard for any chain store legislation being proposed. As of press time, neither the Beverage Journal nor Milani or Wise had heard a bill is imminent or even in the works. "But I would certainly tell our members to prepare like there is," Milani cautioned.

Marshele Burgess, MSLBA Treasurer and proprietor of Rip's Country Inn in Bowie, remarked, "Each business has different issues that are hot-button issues to them, so it is important to keep tabs on those items. Being part of MSLBA and going to the weekly meetings during legislation really helps you to be able to be up to date."

Perhaps the MSLBA's biggest hot-button issue heading into 2020 is a tax one. Any retailer that collects sales tax gets what is called a vendor allowance. So if, for example, you're sending $1,000 to the state in sales tax, you get to keep $100 for the processing of that and so forth.

"When our industry's sales tax went up to 9 percent, that amount was not adjusted," Wise noted. "That's been coupled with the fact that all retailers are now experiencing considerable fees when credit cards are used, and consumers are increasingly paying with credit cards. So, our costs per transaction have gone up. At the same time, the amount of the transaction has gone up because of the sales tax. That's causing retailers to have to fork over more dollars to the credit card companies. We're looking at coming in with some legislation that would adjust that vendor allowance to reflect that the higher sale tax is increasing our costs. Right now, we're trying to get a handle on what would be an appropriate adjustment."

It's a concern for Milani, as well. "We're trying to figure it out," Milani, the owner of Monaghan's Pub in Baltimore, said. "It's not easy to talk about any bill that comes with a price tag. We need to key in on, 'Hey, please help us out with that extra 3 percent the average retailer doesn't have to pay.'"

So, does Milani have a New Year's wish for the industry and Annapolis? When asked this question, he had to laugh first. Then, he replied, "Hey, I always have to play defense. I almost never get to play offense! I guess I would just hope that more legislators come to really know that Maryland is set up for the small business folks who work in their communities. When a bill comes in, we'd love for them to consider, 'What will this do to our small retailers?' And weigh that prior to doing anything. We also have to do our part. And when we do call up about something that affects small business, take a couple of minutes and talk to us. Our story is real, and it's getting harder out here in this age where people want total convenience. They want everything to be delivered right to their front door, and they don't think about the cost that may come with that."

There's no doubt that this is a critical time in state politics, especially where alcohol legislation is concerned.  For many reading this, the goings-on in Annapolis can appear overwhelming.  But Burgess, Wise, and Milani all urged Beverage Journal readers -- from packaged-goods store owners to bar and restaurant operators to brewers and winery proprietors -- to get involved.

"They need to be members of MSLBA, because we do employ a full-time lobbyist who looks out for our interests. We also have a legislative committee that meets weekly during the Session to monitor legislation. Anyone who is new to business reading this must reach out and talk to their local officials in their area. Introduce yourself, let him or her know how many people you employ, and what you're doing in the community. Don't wait for an issue to make your first introduction to a delegate or a senator. Make that introduction now, and try and develop a relationship. If nothing else, they may call you and ask you a question about a bill. Be a resource for them."

Burgess concurred, adding, "It is SO important to have relationships with your local politicians! A good place to start is come to the MSLBA Opening Day legislative reception and Lobby Day."

Perhaps Wise summed it up best: "You can never stress enough how much the legislative process matters to small businesses. It's the old saying, 'Get into the politics … or get out of business!'"