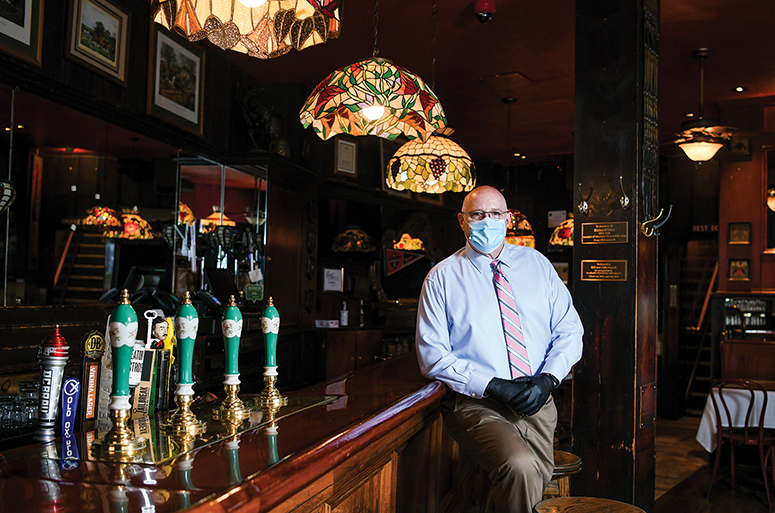 On-Premise Establishments Are NavIgating The Fog of Reopening

Nationwide, restaurants, taverns, and bars are gradually reopening in the pandemic era. And to ensure the return of nervous customers concerned with their health and exposure to a virus still active in the population, some are taking some pretty bold steps. In St. Louis County, Mo., chef-owner Robert Zanti has installed transparent, Plexiglas dividers between tables in his dining room to put guests at ease. Dan's Place Restaurant in West Greenwich, R.I., has retrofitted its indoor HVAC system with an ultra violet light and metal catalyst that effectively kills viruses in the air.

Closer to home in Maryland and Washington, D.C., our intrepid owners and operators are being similarly aggressive. For example, several popular eateries have purchased ActivePure air purifiers from Vollara Health & Wellness. Dana and Alex Theodoropoulos, proprietors of the Black Forest Taphouse in Fallston, Md., are among them.

Said Dana, "We've purchased two air purification systems – one for the bar area and one for the [dining room]. Vollara's ActivePure technology is the most powerful air and surface purification technology and is the same technology used by NASA for the space shuttles. It's used to treat problems such as mold, mildew, viruses, bacteria, and allergens in the air.  They use ultraviolet light with a fan system to pull in air and then push out the clean air up to 3,000 square feet." 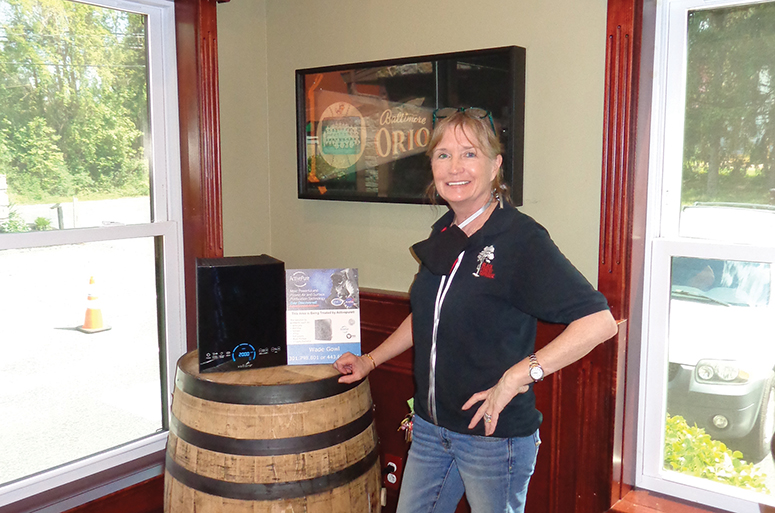 Dana Theodoropoulos, proprietor of the Black Forest Taphouse in Fallston, Md. is pictured above with their Vollara ActivePure unit.

Local Vollara representative Wade Gowl notes that his company's air purifiers were popular back in the days before smoking was prohibited in restaurants and bars. Fortunately, the technology has endured. "Everybody is going to be wary of eating out, maybe from now on," he stated. "They want to not only feel safe, but be safe. Coincidentally, we just happened to have the proper technology to take care of their concerns. You just plug it in and turn it on. There's sometimes a little adjustment that needs to be done. But it's nothing complicated. You don't have to talk to the landlord about putting it in either. It basically looks like a stereo speaker. It should be placed where most of the people are. The more wide open your interior is, and the more air flow there is, the better job it will do."

His colleague, Leia Ryan, added, "Indoor environmental conditioning is what we are doing. Restaurant owners' No. 1 priority is keeping the customer safe. The nice thing about our technology is it's filter-less technology. You set it on a counter, and it will indeed take care of a 3,000-square-foot area and two to three levels." 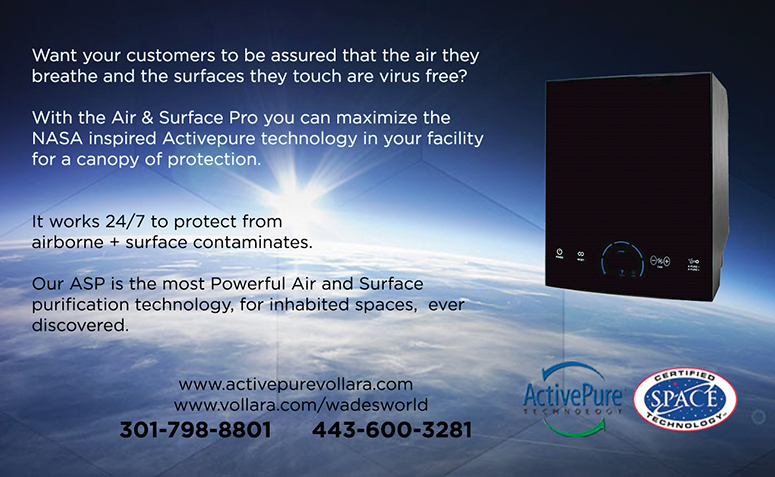 Also proving popular is an anti-microbial fogging spray championed by Tony Anzelone, owner of Bianchi Fogging Services in Virginia. The historic Martin's Tavern (where John F. Kennedy proposed to Jackie in one of the booths) in D.C.'s Georgetown neighborhood contracted his service, and Anzelone is looking to expand his clientele into Maryland.
Anzelone typically comes in around closing time when everything is being shut down and fogs the entire restaurant with the anti-microbial spray. He focuses on hot spots like the entryway of the restaurant, the entry of the kitchen, behind the bar -- areas that get the most foot traffic.

"But I do hit every nook and cranny that I possibly can," he said. "And I also focus on hitting the ducts, the vents, and the air registers. It's a quick process. The average restaurant is around 4,000- to 5,000 square feet. From the time I set up to the time I leave, it's right around 45 minutes to an hour. You then come in as the proprietor the next morning and do your normal set-up. wiping down the countertops, the condiments, and so forth and that's basically it."

He added, "The good thing about fogging as opposed to just spraying with a bleach bottle is fogging gets every nook and cranny. These anti-microbial sprays are live bacteria. They stay alive and in that property effective for up to 90 days. So, if someone comes in with COVID-19 and they start touching things, all of your spraying goes right out the window. It's only good until somebody comes in who's infected. An anti-microbial spray has live bacteria that eats bad bacteria, that stays on the property for 90 days while you are open."

So far, Martin's Tavern owner Billy Martin is impressed. "Tony's service has given us a lot more peace of mind," he remarked. "We still do the day-to-day wiping of everything down. But it's the areas that you can't get to or can't see where the fogging is really good."

Martin and the Theodoropouloses aren't the only ones dealing with the "new normal." When the word came down in late May from Governor Hogan and the state government that Maryland restaurants could only start serving customers on site via outdoor seating, Lenny Wohlfarth, owner of Oliver's Old  Towne Tavern in Laurel, Md., took steps to offer outdoor dining for the first time ever.

"We did a trial run and things went pretty well," he noted. "We have five tables, and we can fit four to a spot. We're taking reservations for Noon, 2 p.m., 4 p.m., and 6 p.m. We've been asking people to be patient with the situation and be able to have their tabs closed at 15 minutes 'til the next reservation. That gives us time to sanitize things properly."

"We have sanitizing spray available for the customers that the servers can bring over," he added, "sort of like our version of Olive Garden coming to the table with the grated parm! We also are using the front door only for carry-out. We let the outdoor diners know that they can use the restrooms. But they use the side entrance, and a mask has to be worn to come inside."

Alex Theodoropoulos is taking a page from some of the national fast-food and casual dining chains that have been open throughout the crisis with curbside pickup and delivery. "All employees will be temperature checked upon arrival during the reopening phases," he pointed out. "According to CDC guidelines, if we detect an employee's temperature to be above 100.4, we should ask for you to leave and be tested. I am reducing the 100.4 guideline to 100.0 flat.  You will be required to provide proof from a doctor with a return back-to-work date."

He and Dana are also encouraging customers to use their electronics to view the Taphouse's menus. Billy Martin is also going the technology route: "Right now, we're using one-time-use paper menus. But we're looking at getting QR codes with our menus on them so that people can look everything up on their phones and order off of that. We're working with a couple of companies to get a good price on that and should have up and running shortly, too."

Chris Richards, owner of Greenmount Station in Hampstead, Md., is another proprietor who is looking forward to a full reopening. He also has installed Vollara's air purifier in his restaurant's interior. What are some other steps he's taken? "We have a COVID-19 sanitizing training [program] that we will be doing for returning waitstaff. We'll continue to keep an hourly log of wiping down door knobs and anything that gets touched on a regular basis. Every hour on the hour, we've been doing that. We'll be wearing masks. We've increased our hand washing frequencies. We won't have any communal condiments on the tables either. We'll have things like single-serve packets of ketchup, salt, pepper, and so forth."

Everyone interviewed for this article agreed that taking such measures means very little if customers aren't aware of what they've done. Vollara's Gowl and Ryan concur that signage is key. The latter remarked, "We offer 8.5-inch x 11-inch signage. It says to the customer that this area is being treated by ActivePure and that is a solution to problems like viruses, bacteria, allergies, asthma, smoke, VOCs, odors, mold, and mildew. We also have 18x24 window and door signage, so basically your clientele on the outside can tell, 'Hey, they're doing something different in there."

Martin has been especially aggressive in getting the word out. "We have touted [the anti-microbial fogging] on social media. We have some signs up. And we've gotten some big 'Thumbs up!' from people as a result, saying, 'That's great!'" 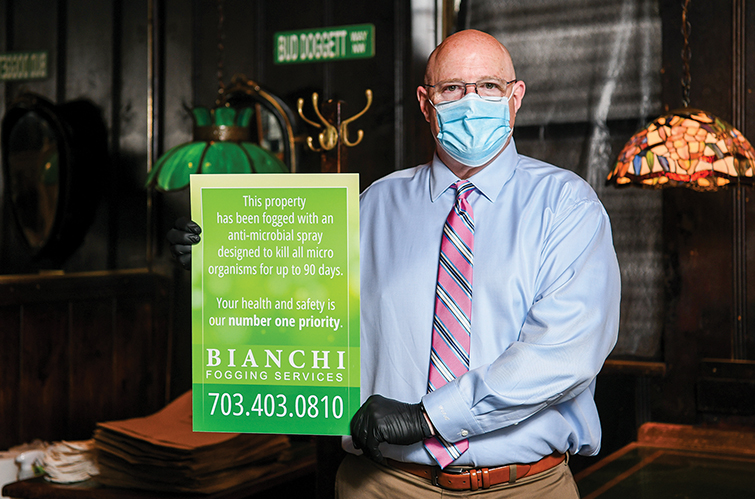 Billy Martin of Martin's Tavern in the DC's Georgetown neighborhood let's his customers know his premises are protected with the Bianchi Fogging System.

Anzelone concluded, "You want to take the steps to let everyone know they're safe when they're entering your restaurant. That means you have to get it out communication-wise. You have to let everybody know that you've taken the steps that need to be taken for your customers to come back and have a good experience. Nothing is 100 percent. But you have to do everything you possibly can to make sure people are taken care of."